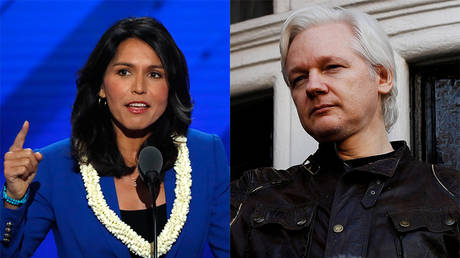 2020 candidate Tulsi Gabbard has spoken out against the US government’s plans to extradite and punish WikiLeaks co-founder Julian Assange, calling it a “blow to transparency and a blow to a free press.”

Speaking to MSNBC’s Chris Matthews on Thursday, Gabbard defended the prior administration’s decision not to attempt to extradite Assange. Despite his administration’s record use of the Espionage act against whistleblowers, Barack Obama opted not to pursue charges against Assange, claiming it would create a dangerous precedent for journalists.

Assange Arrest: The message is clear. To journalists and all Americans, if you try to take away our power, you will pay a high price. pic.twitter.com/tEgVt6t6Tm

“This is a threat to journalists,” she told Matthews, “but it’s also something that threatens every American, because the message that we are getting, that the American people are getting is: Be quiet, toe the line, otherwise there will be consequences.”

Assange was dragged from the Ecuadorian Embassy in London by British police on Thursday morning, and later found guilty of skipping bail back in 2012. He is due to be sentenced next month and could face a year in prison. Separately, the US Justice Department has indicted Assange on “conspiracy to commit computer intrusion,” with US Army whistleblower Chelsea Manning in 2010.

The WikiLeaks founder received little sympathy from Gabbard’s fellow lawmakers, Republican or Democrat. Senate Minority Leader Chuck Schumer flogged the dead horse of the ‘Russiagate’ conspiracy, accusing Assange of “meddling in our elections on behalf of Putin,” a sentiment echoed by Intelligence Committee chair Richard Burr (R-North Carolina), who said that WikiLeaks “effectively acted as an arm of the Russian intelligence services for years.”


Progressive figurehead and 2020 contender Bernie Sanders kept quiet on the whole affair, while failed 2016 candidate Hillary Clinton told an audience in New York that “it’s ironic that he may be the only foreigner that this administration would welcome to the United States,” before chuckling at her own joke.

President Donald Trump, who told campaign rallies “I love WikiLeaks” in 2016 now seems to be ready to wash his hands of Assange. Asked about the arrest on Thursday, Trump told reporters “I know nothing about WikiLeaks. It’s not my thing.”

If extradited and found guilty, Assange faces five years in prison for the US charge. However, his lawyers are concerned that the Justice Department may tack on additional charges, and have vowed to fight the extradition process tooth and nail.