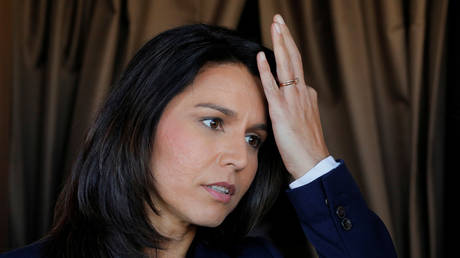 2020 presidential candidate Tulsi Gabbard attempted to reach Game of Thrones fans via Twitter by using their own language – memes – but instead cemented herself as the official “mom” of social media.

The Hawaii Rep. was lamenting the bad weather that delayed her flight from LA to Chicago on Sunday, and took the opportunity to score some sweet pop culture points by referencing the highly anticipated return of Game of Thrones.

However, it was the accompanying mismatched meme featuring a quote and character from Lord of the Rings (played by actor Sean Bean who also appeared in GOT) that netizens found inexcusably offensive.

One does not simply mash up J.R.R. Tolkien and George R.R. Martin references. =:^)

Nice picture of Ned Boromir who died in episode one of Lord of the Thrones.

Tulsi… that’s Lord of the Rings

Lord of the Thrones is my favorite show!

Gabbard learned the hard way that one must know what one is doing before simply selecting a meme, especially on Twitter, and mashing cult classic quotes together is a bold move best left to the experts.

oh no who showed her how to meme

Whether the politician really was confused about the meme’s origin, or simply didn’t understand the severity of her decision to mix the two, we may never know.