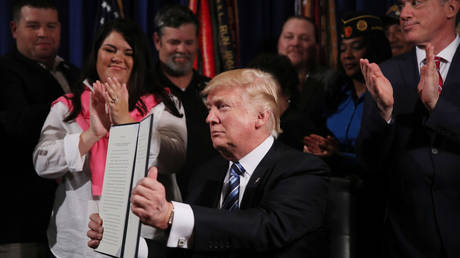 In an ironic twist, the agency tasked with protecting those who blow the lid on illegal activity inside the government is ITSELF being accused of retaliating against whistleblowers – can anyone protect them from the protectors?

While Trump opened the Office of Accountability and Whistleblower Protection (OAWP) in order to watch over those reporting potential crimes inside government agencies, some government employees are saying it ended up doing exactly the opposite.


The investigation is being led by the Veterans’ Affairs Department’s Inspector General, which has fielded a flood of complaints from those who came to the OAWP for help and ended up in an even more dangerous situation.

“It’s a crooked system where literally the fox is guarding the hen house,” VA Administrative Officer Jay DeNofrio told Government Executive. He says he was shocked to find that the agency seemed to be more interested in investigating him than the VA doctor he reported for putting veterans at risk by continuing to practice despite his dwindling mental capacity.

In one particularly heinous case, the chief engineer at the VA’s Northern Indiana Health Care System, Dan Martin, asked the office for backup after he reported his superiors for possible contracting violations. Martin says that instead of keeping him protected, the OAWP essentially blew the whistle on the whistleblower. They gave the people who Martin had informed on his name, and actively sabotaged an investigation by letting them know they were being secretly recorded.

“Some of them are so crooked they swallow nails and spit up corkscrews,” Martin quipped. “OAWP set me up.”

VA spokesman Curt Cashour said that things have changed, and the agency now tells claimants if the investigation they initiated has been resolved, and allows them to keep their names out of the reports which notify suspects they are being investigated. However, the agency says it will not stop “referring cases of misconduct back to facilities and program offices where the misconduct occurred,” which essentially means that calling in OAWP protection could continue to actually make matters worse for whistleblowers.


The whistleblower-protection initiative was a key piece of President Trump’s 2017 reform package for the VA, a notoriously troubled agency with a “culture famous for intimidation and reprisal.”