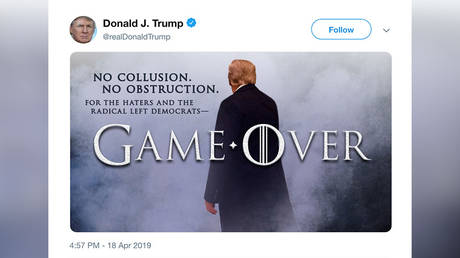 Attorney General William Barr held a press conference expanding on his summary of the Mueller report. With Barr emphatically declaring “no collusion” again, President Trump took to Twitter to declare “Game Over.”

“No collusion. No obstruction. For the haters and the radical left Democrats…Game Over,” Trump tweeted on Thursday, deploying some ‘Game of Thrones’ style imagery.

Barr told reporters once again that the long-awaited report “did not establish that members of the Trump campaign” colluded with Russia to swing the 2016 presidential election. The report, Barr said, outlines a Russian campaign to “sow discord” in the runup to the vote, but “found no evidence that any American conspired or coordinated” with Russia in this scheme.


Several Russian nationals and entities were indicted by Mueller for this alleged interference, but will likely never face an American court, rendering the indictments mostly symbolic and their guilt uncertain.

“So that’s the bottom line,” Barr concluded. “After nearly two years of investigation, thousands of subpoenas, hundreds of warrants and witness interviews, the Special Counsel confirmed that the Russian government sponsored efforts to illegally interfere in the 2016 presidential election, but did not find that the Trump campaign or other americans colluded in those efforts.”