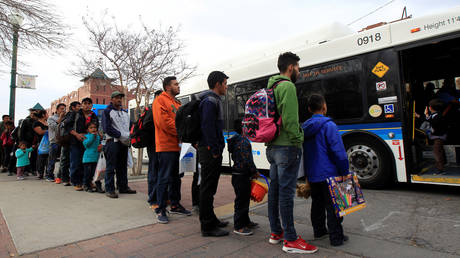 US President Donald Trump once again called on Democrats to support tighter immigration laws, threatening to dump “an unlimited supply” of illegal immigrants in so-called sanctuary cities to force a change.

“Due to the fact that Democrats are unwilling to change our very dangerous immigration laws, we are indeed, as reported, giving strong considerations to placing illegal immigrants in Sanctuary Cities only,” the president tweeted on Friday, adding: “The Radical Left always seems to have an Open Borders, Open Arms policy – so this should make them very happy!”

….The Radical Left always seems to have an Open Borders, Open Arms policy – so this should make them very happy!

Answering reporters at an unrelated press event an hour later, Trump elaborated on his plan.

“We’re apprehending thousands and thousands of people a day,” he said, adding that current laws only allow those caught to be held in custody for 20 days. “We can fix that so fast, if the Democrats would agree,” otherwise “we bring them to sanctuary city areas and let that particular area take care of it.”

Trump’s announcement wasn’t a total surprise, as two Department of Homeland Security officials told the Washington Post on Thursday night that his administration has proposed similar plans before, as a political move to pressure Democrats into supporting immigration reform. However, CNN and the Post both reported that the DHS and White House denied the proposal was still under consideration – before Trump revived it on Friday.

Also on rt.com
‘Our country is full’: Trump vows more troops at border on visit to wall in California (VIDEO)


With only small sections of Trump’s long-promised border wall under construction, more than 92,000 people were apprehended at the border in March, the highest level since 2008.

Against this backdrop, a number of mostly Democrat-run cities have enacted laws preventing their police forces from cooperating with federal immigration authorities and agencies like Immigration and Customs Enforcement (ICE). Under Governor Jerry Brown, California has gone as far as declaring itself a ‘Sanctuary State,’ and refused to honor thousands of ICE requests to turn over illegal aliens in 2016-2017, including 3,400 charged with murder, sexual assault, kidnapping, aggravated assault, and other serious offenses.

For some reason, however, the Democrats in charge of these sanctuary jurisdictions expressed outrage at Trump’s proposal. San Francisco District Attorney George Gascon argued that illegal immigrants are “less likely” to commit crime than the US-born population, before calling the proposal “an all-time low for American discourse.”


“I am proud to be the mayor of a sanctuary city,” Oakland mayor Libby Schaaf said, also invoking the talking point about immigrant crime rates being supposedly lower than those of native-born Americans. She opposed Trump’s idea all the same.

House Speaker Nancy Pelosi (D-California) also slammed the proposal, calling it “unworthy” of the presidency and “disrespectful of the challenges that we face as a nation.”

Pelosi’s district lies entirely within San Francisco, a sanctuary city. Pelosi said on Thursday that “there’s room and there’s a need” for more immigrants – but apparently not on her doorstep.

Actress-turned-activist Alyssa Milano – who once described herself as “an immigrant” in solidarity – also weighed in, calling Trump’s plan “sick and twisted.”

This is so sick and twisted.

Democrats were soundly mocked by Trump supporters for following up their declarations of love for migrants with outrage at the idea of actually having them nearby. They were, after all, the ones calling for open borders, more immigrants and sanctuary cities – supposedly the places where the illegals are the most welcome.

Pelosi complaining that White House wanted to send any illegals crossing the border to her district in California. Wait…doesn’t she WANT them? Isn’t she ALL FOR sanctuary cities?

You can’t have it both ways, Nancy. You OUGHT to be willing to take them in.

Pelosi: We want illegal aliens in our sanctuary cities.

Pelosi: That is outrageous!