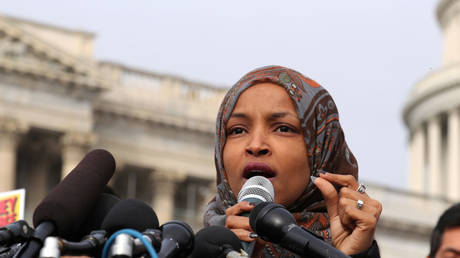 US President Donald Trump has doubled down on his heated criticism of Democrat Ilhan Omar, accusing the congresswoman of anti-Semitism and claiming “she is out of control.”

Twitter erupted on Friday after Trump tweeted a video showing scenes of the 9/11 terrorist attacks intercut with a quote from Omar. Addressing the Council on American-Islamic Relations (CAIR) earlier this month, Omar commented about the stigma towards American Muslims in the wake of 9/11. However the video Trump shared took just one sentence from her speech, saying that “some people did something” on 9/11.


The response online was swift: Social media users sent messages in droves either accusing Omar of minimizing 9/11 and being un-American, or to accuse Trump of intentionally taking her line out of context and potentially endangering her life.

Tweeting on Monday, Trump showed he wasn’t prepared to back down over the furor, accusing Omar of making “anti-Semitic, anti-Israel and ungrateful U.S. HATE statements” and calling on top Democrat Nancy Pelosi to step in.

Before Nancy, who has lost all control of Congress and is getting nothing done, decides to defend her leader, Rep. Omar, she should look at the anti-Semitic, anti-Israel and ungrateful U.S. HATE statements Omar has made. She is out of control, except for her control of Nancy!

Pelosi had earlier called on Trump to take down the video tweet, adding she has serious concerns for Omar’s safety due to the resulting outcry against the congresswoman.

.@realDonaldTrump’s dangerous video must be taken down. I have spoken with the Sergeant-at-Arms to ensure that Capitol Police are conducting a security assessment to safeguard Rep. @Ilhan Omar, her family & her staff. They will continue to monitor & address the threats she faces. pic.twitter.com/Grb9c8S18d

In a Twitter thread responding to Trump’s video post, Omar said that no one could threaten her “unwavering love for America.”

No one person – no matter how corrupt, inept, or vicious – can threaten my unwavering love for America. I stand undeterred to continue fighting for equal opportunity in our pursuit of happiness for all Americans.

Also on rt.com
Rep. Ilhan Omar cites Islam holy text in response to Trump mocking her for not liking Israel