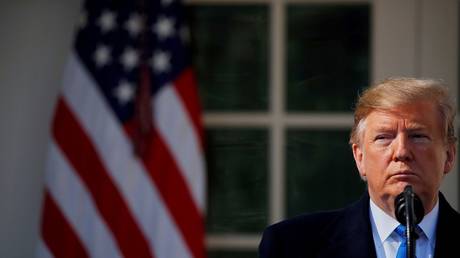 US President Donald Trump agreed with singer and liberal activist Cher that California can’t even take care of its own citizens, but tweeted he will follow through on his threat to start sending illegal immigrants there.

“I finally agree with Cher,” the president tweeted Monday morning, after the pop diva bemoaned how Los Angeles has 50,000-plus US citizens living out on the street and can’t take any more. He even included a screenshot of Cher’s tweet, just in case she decided to delete it (she hasn’t).

The singer and actress was already catching all sorts of flak online, having previously advocated for taking a ‘Dreamer’ (as Democrats have called people brought into the US illegally as children) into her home and encouraged others to do the same.

Last week, Trump triggered his liberal critics by proposing to bus asylum-seekers caught crossing the US border illegally to “sanctuary” cities and states, instead of releasing them into border communities. On Monday, he announced this “will” happen, “subject to Homeland Security.”

Those Illegal Immigrants who can no longer be legally held (Congress must fix the laws and loopholes) will be, subject to Homeland Security, given to Sanctuary Cities and States!

Under a 1997 settlement, children who are caught crossing the border illegally can be held for a maximum of 20 days, mandating a de facto “catch and release” policy for anyone who crosses the border with a child. The Trump administration sought to circumvent that last year by building detention centers for minors, but caved in to liberal outrage over “inhumane” family separations.

Since then, illegal border crossings have surged to what Customs and Border Patrol has described as a “breaking point.” Sending illegal immigrants to “sanctuary” areas is Trump’s latest gambit to force Democrats into amending current immigration laws.

In addition to a number of cities refusing to cooperate with federal authorities in enforcing immigration laws, California declared itself a “sanctuary state” in 2017.