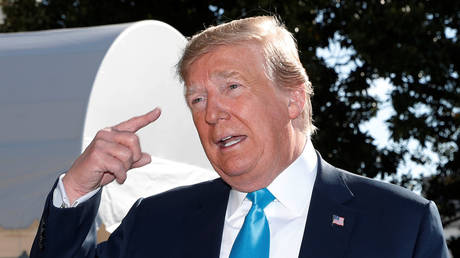 Amid the ongoing Boeing 737 MAX scandal, the company’s share price has plummeted and international fleets of the problematic plane are grounded, but one unlikely source has offered some advice: Donald Trump.

The US president tweeted his hot take on the embattled airliner’s issues in the early hours of Monday morning, suggesting a rebranding and some unspecified “additional great features” were the recipe for a reversal of Boeing’s misfortune.

What do I know about branding, maybe nothing (but I did become President!), but if I were Boeing, I would FIX the Boeing 737 MAX, add some additional great features, & REBRAND the plane with a new name.
No product has suffered like this one. But again, what the hell do I know?


As expected, opinion on Twitter was divided, with many highlighting the president’s own plethora of failed business ventures over the past few decades.

great idea, they could rebrand it as Trump Air … oh wait, there already was a Trump Air and you flew it right into yet another bankruptcy. oh well, cool business advice there, Guy Who Failed At Every Job Except Game Show Host, tell us another

interesting that you equate being the president of the united states with your own personal brand, not a sense of civic duty… you really are a useless piece of shit by the way…well, not useless, you expose the idiots that fall for you like flies gather on shit.

Lol, NO product has suffered?

Everything you put your name on has suffered BIGLY:

It’s almost as if your name is poison.

Others made light of the president’s remarks, and a few staunch supporters rushed to Trump’s defense.

You know nothing, Don Snow.

Wonder if he’ll recommend 737 MAGA. Worked for him.

It sounds like solid advice to me, Mr President!

They would do well to listen!

Make the 737 Max Air Force One

Just eating popcorn for the far left comments on how smart they are. Not, oh and comments here. Let the fireworks fly. TRUMP 2020