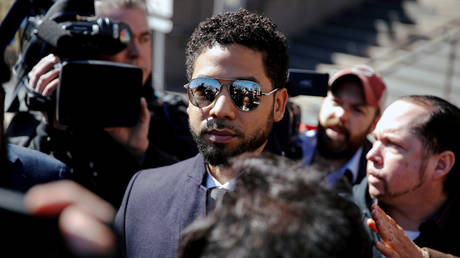 US President Donald Trump confirmed the FBI and DOJ will review the “outrageous” Jussie Smollett hate-crime hoax case after prosecutors unexpectedly dropped all charges and sealed records on Tuesday.

‘Empire’ actor Smollett had been indicted on 16 felony counts after staging a hate-crime against himself in January, but they were mysteriously dropped this week, potentially allowing the actor to get away with just two days of community service and forfeiting his $10,000 bond to the city.

In a Thursday morning tweet, Trump said that the case was “an embarrassment to our Nation.”

FBI & DOJ to review the outrageous Jussie Smollett case in Chicago. It is an embarrassment to our Nation!

In an elaborate hoax, the actor claimed that masked men shouted racial abuse at him and put a noose around his neck while shouting pro-Trump slogans. It later emerged that Smollett had allegedly paid two Nigerian men to stage the incident.

The FBI opened an inquiry into the “circumstances surrounding dismissal of criminal charges” on Wednesday after local Chicago authorities demanded an explanation for the decision.


Following the decision to drop the charges – and seal the records – the controversial actor claimed he had been “truthful and consistent” from the beginning and said the state had done “what’s right” for the case.

The public outcry forced State’s Attorney Kim Foxx to say that the files must have been sealed “inadvertently” and that they would “probably” be unsealed. Foxx had previously recused herself from the case after reports emerged that she had tried to have the initial fake “hate crime” case transferred to the FBI.

The FBI is also reportedly investigating claims that Smollett mailed a threatening letter with a picture of a noose and some fake anthrax to himself at Fox’s Empire studios.