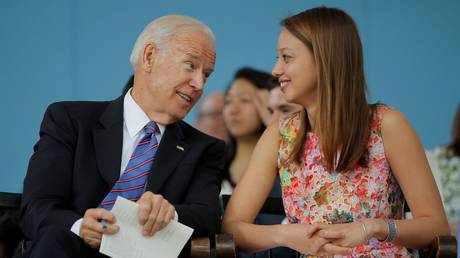 President Donald Trump reminded Twitter that he is the heavyweight sh*tposting champion of the world, tweeting a montage of former VP Joe Biden sniffing himself during his video-apology… for sniffing people.

Videos of the former VP and likely 2020 candidate sniffing, touching and otherwise creeping out women and children at Washington events have circulated for years. Biden’s ‘creepy uncle’ demeanor was dragged into the media spotlight in recent days, however, after no fewer than seven women publicly accused him of inappropriate behavior.

Trump jabbed at his potential presidential rival in his own brash style, retweeting a doctored video showing the handsy Democrat fondling himself and sniffing his own hair, as accuser Lucy Flores says he did to her.

“WELCOME BACK JOE!,” Trump taunted, as Biden explained in his apology video that his touchy-feely style with “women, men, young and old” is simply “the way I’ve always been.”

The Earth is 4 Billion Years Old

The average human lifespan is 80 years

And you are alive during the Trump timeline

Please put out a beto is a furry video next

His opponents boiled with rage, some even managing to bring Russia into the argument. “Congratulations America,” wrote one. “With the help of Russia you elected a 2 year old as your president.”

Congratulations America, with the help of Russia you elected a 2 year old as your president!

This is beneath the Office of the President of the United States and belongs on a cheap 4chan forum. Donald Trump Jr. is busy creating these really immature memes and it’s plain disgusting.

Carpe Donktum’s clip isn’t the first of the meme-maker’s works retweeted by Trump. The president tweeted a video of Democrats reacting to his State of the Union address accompanied by the maudlin sounds of REM’s ‘Everybody Hurts’ in February, to a predictable response from both sides.

Nor is it the first time Trump has mocked Biden for his mannerisms. “One of the hardest jobs in politics must be cleaning up after @JoeBiden gaffes,” he tweeted in 2012. “I feel sorry for his spokespeople.”