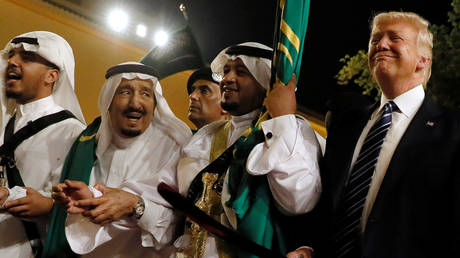 Tulsi Gabbard, a candidate for the Democratic presidential nomination, has called President Donald Trump’s decision to veto a bill seeking to end US support for the Yemen war nothing less than proof he serves Saudi Arabia.

By vetoing the bill dubbed the War Powers Act, Trump again “proves he’s the servant of Saudi Arabia – the theocratic dictatorship spending billions spreading the most extreme and intolerant form of Islam around the world, supporting al-Qaeda & other jihadists, and waging genocidal war in Yemen with US help,” Gabbard said in an emotional tweet.

The War Powers resolution, approved in the House of Representatives in April and the Senate in March, was vetoed by President Donald Trump, who said it was an “unnecessary, dangerous attempt to weaken my constitutional authorities, endangering the lives of American citizens and brave service members.”

In the video that accompanies the tweet, Gabbard is heard saying that the US is complicit “in this genocide that’s causing millions of people to starve and suffer.” She accused Trump of being “more interested in pleasing the Saudis that doing what is right.”


This is by no means the first time Gabbard has attacked Trump over Saudi Arabia. Last year, she tweeted: “Hey @realdonaldtrump: being Saudi Arabia’s b*tch is not ‘America First.’”

Since a Saudi-led coalition started the military offensive against Yemen in 2015, an estimated 60,000 Yemenis have died due to the conflict, and another 85,000 have succumbed to famine and malnutrition. Airstrikes conducted often with munitions supplied by the US and its allies frequently target areas with civilians. The Saudis say they are acting in support of the exiled president, Abd Rabbu Mansour Hadi, against the Yemeni Houthis who control most of the country. Riyadh and its Western allies accuse the opposition group of being proxies of Iran.