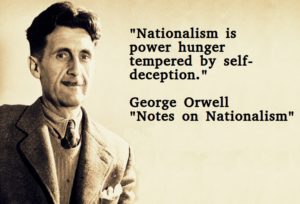 This is not an ordinary review or even rehash of George Orwell’s 1945 essay, “Notes on Nationalism.” Rather, it is a reflection on and attempt to expand and re-contextualize the ideas expressed there with comments directly relevant to 2018. Orwell’s main points—the varied and ubiquitous nature of irrational groupisms (which he calls “nationalism”) and how they distorted judgment in the context of 1945—serve less as a direct focus than as a springboard to related considerations.

First, I do not use “nationalism” in the broad sense Orwell does. In its place I use the less-specific “tribalism”. Merriam-Webster defines this as “strong in-group loyalty”; its negative characteristic, extreme Othering, or strong out-group aversion, deserves emphasis. Of course, disparaging “nationalism,” or using it to stand in for other contemptible groupisms (as Orwell did) in 1945, can hardly be second-guessed.

Nationalism had to that point certainly demonstrated its capacity as a powerful and destructive form of tribalism—often with an attendant strong out-group aversion. It deserved, and deserves, condemnation for its irrationality and monumental crimes. However, it also deserves criticism for its modernist derivation—or, for what it says about modernism, for the lows to which modernism could be taken in the formation of irrationalist elitist-serving, and, in crucial ways, anti-modern political innovations. (This is one sense in which some…