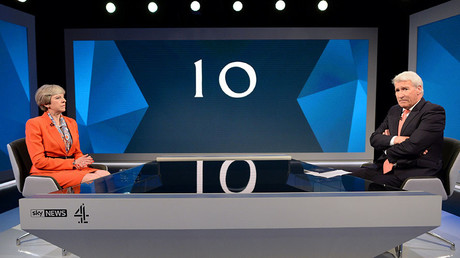 Poll numbers when the election was announced in late April suggested this campaign would be something of a “slam dunk” for the Conservatives prior to Monday’s showing. Now, after Theresa May was chided by the studio audience for her response to questions on health and police spending, her team might be forced into a rethink.

Some of the answers in May’s town hall-style Q&A, as well as her sit down with veteran interviewer Jeremy Paxman, might have left some Conservative voters feeling a little frazzled.

Twitter users felt she may have stumbled on her insistence that “no deal” with the European Union regarding Brexit “is better than a bad deal.”

For May, a chance to get one over on a rival didn’t quite go as planned, as audience members laughed at her insistence that she had not performed a U-turn over her healthcare plans.

Some viewed this as something of a perpetual calamity.

Others likened her appearance to a train wreck. At one point, Paxman judged her record to be akin to a “blowhard who collapses at the first sign of gunfire.”

Many Twitter users felt she had been hurtling headlong toward disaster from the first moment, when a police officer asked about cuts to the police budget in light of the Manchester terrorist attack.

There was also a suggestion that she allowed a few easy questions past her.