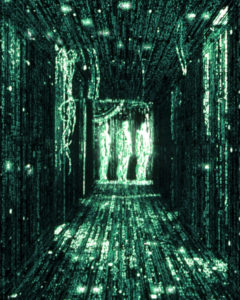 “Unfortunately, no one can be told what the Matrix is.  You have to see it for yourself.”

Those words were first spoken twenty years ago and sent people flocking to movie theaters to find out just what the Matrix was.  When The Matrix came out, I was going through a phase of spiritual exploration, with a particular focus on Gnosticism, so the premise that reality is a dream controlled by malevolent forces resonated with me at the time.  Although the number of essays and books written about the movie and its implications has waned over the years, the imprint left by The Matrix on pop culture remains to this day.

Despite the adoption of the term “red pill” by conservatives and various elements of conspiracy culture (proving once again that the Right continues to steal imagery from the Left), The Matrix is a very anti-capitalist movie as shown by its literal use of human resources, a theme the Wachowskis would revisit in their later movie Jupiter Ascending.

“The Matrix is a system, Neo. That system is our enemy. But when you’re inside, you look around, what do you see? Businessmen, teachers, lawyers, carpenters. The very minds of the people we are trying to save. But until we do, these people are still a part of that system, and that makes them our enemy. You have to understand, most of these people are not ready to be unplugged. And many of them are so inured, so hopelessly dependent on the system, that they…