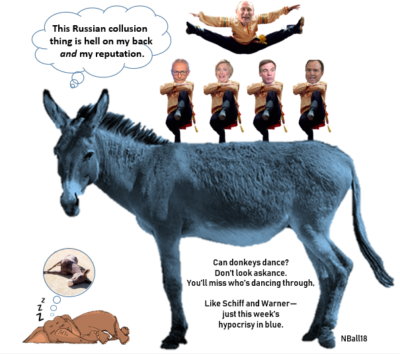 Schiff Is a Shill for the Russians
— Mark Levin

While the enemy states produced unprecedented atrocity propaganda aimed at Germany throughout the whole world, we did nothing and were completely defenseless against it…Just as we were militarily and economically unprepared for the war, so also with propaganda. We lost the war in this area more than in any other. The cleverest trick used in propaganda against Germany during the war was to accuse Germany of what our enemies themselves were doing. (My italics)

History repeats even its most odious chapters. Today, the cleverest trick against President Trump in the current high-stakes establishment war is to accuse him of what his enemies, mostly Democrats, are already up to their donkey-ears in: Russian collusion.

The term Russian collusion sounds like it walked off a Tavistock Institute clipboard with the usual aim of promoting fear and avoiding mass enlightenment. Knowledge is power. Enlightenment is the coveted reserve of the Few. Not surprisingly, power favors misdirection (ignorance) over enlightenment (empowerment). Dumb down and frighten — divide and conquer.

This is why the plebeian class is often referred to as the disorganized masses. Buffeted by successive waves of misdirection, society becomes a de-articulated…