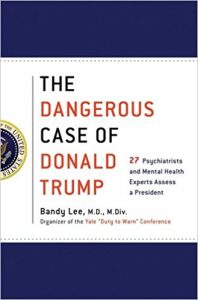 As a practicing neurologist, as well as a Marxist and socialist feminist, Dr. Bandy Lee’s best-selling anthology caught my eye.  I have learned over many years how oblivious contemporary American psychiatry and psychology are, with some heartening exceptions, to the role capitalism plays in the production and circulation of mental illness.  I wondered if this book would do better.

Sadly, it does not.  In fact, if Donald Trump is as dangerous as the authors claim, then their volume is at least as dangerous, because both their analysis of and solution to the problem, if taken seriously, can only make matters worse.  They do not question the very social foundations which have without a doubt led to Trumpism.  They treat Trump the symptom without touching the underlying disease, and even then their remedy is a small dressing over a gaping and festering wound.

The authors’ discussions are entirely in the liberal tradition.  They clearly support progressive causes, like opposition to racism, sexism, homophobia, and xenophobia, but they do not once question the underlying capitalist system which aids and abets these social crimes.  They do not consider that it was precisely the mass disillusionment created by a combined liberal-conservative assault on working peoples’…