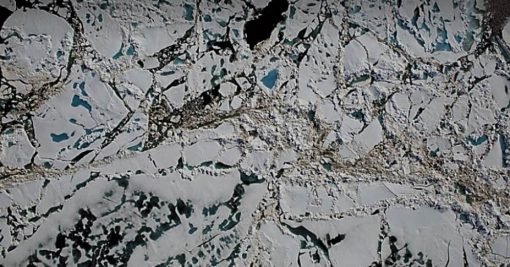 As extreme temperatures, the rate of sea ice melt, the collapse of Greenland glaciers, the thawing of Siberian and Canadian permafrost and increased evaporation in the Arctic drive cold snow storms into Europe and North America, and as hurricanes and wild fires affect tropical and semi-tropical parts of the globe, it is becoming clear Earth is entering a shift in state of the atmosphere-ocean system associated with destructive climate tipping points. As Arctic permafrost is thawing an analogy with geological methane-release events such as the 56 million years-old Paleocene-Eocene boundary thermal maximum (PETM) event is becoming more likely.

As is well known to students of the history of the climate, once a temperature threshold is breached, abrupt weather events ensue amplified by feedbacks such as decreased reflectivity of the Earth surface and enhanced release of greenhouse gases, often within short time frames. 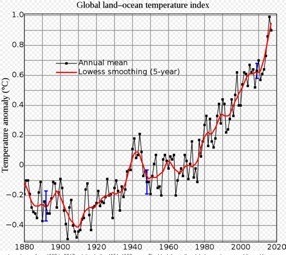 Such abrupt changes are occurring at present. As mean global temperature has exceeded 1.2 degrees Celsius above 1880 temperatures (Figure 1), sharp reductions occur in Arctic sea ice from 45 percent in 1985 to 21 percent in 2017, when the ice cover was 8.5 percent lower than the average of 1981-2010.

As the ice melts the near-total reflection (high albedo) of solar radiation from the ice is replaced by absorption of infrared radiation by open water. The flow of…