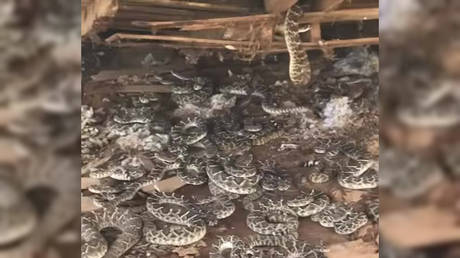 A Texas man got quite a shock when he accidentally unearthed dozens of venomous rattlesnakes while working on his ranch.

Bobby Cowan and his friends were doing some work on his property near Gorman when one of the group spotted a small rattlesnake slither underneath an abandoned hunting cabin.

They decided to use a skid-steer loader to lift the dilapidated building and get another look at the reptile but when they raised the shack off the ground they got far more than they bargained for as dozens of rattlesnakes wriggled to life.

“We were definitely –what’s the right word– freaked out, maybe,” Cowan said to the San Antonio Express-News. “Very, very surprised. As soon as we lifted up the building, we slammed it right back down because there were so many of them.”

After the initial shock passed they decided to raise the cabin again and this time one of the group caught the exposed nest on video. Cowan later posted the footage on Facebook and it has already been viewed more than three million times.

The scene sparked numerous startled reactions with several viewers saying that the snakes were going to haunt their dreams. “Seriously! I would burn EVERYTHING!! I’m going to have to ‘hide’ this video so it NEVER shows up in my feed again!” one person wrote.


When the group lifted the hut the second time they noticed that the snakes were moving more slowly than usual, likely due to winter temperatures. “We knew we weren’t in that much danger if we didn’t get too close, and so then we were able to look at them,” Cowan said.

Showing an uncommon level of calmness the ballsy ranchers then used long sticks and trash cans to move the snakes to another part of the property that didn’t have livestock. They counted at least 36, but said there could have been as many as 50.