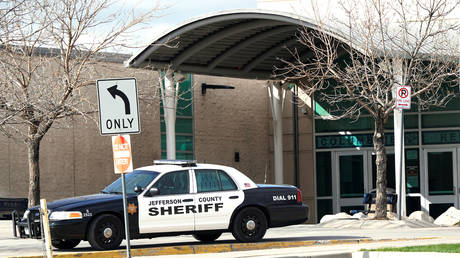 The woman wanted by the FBI in connection with threats that put several Denver-area schools on lockdown on Tuesday was found deceased from a self-inflicted gunshot wound, law enforcement officials confirmed.

On Tuesday, the FBI launched a massive manhunt for 18-year-old Sol Pais, who, authorities said, had an “infatuation” with the Columbine high school massacre, the 20th anniversary of which occurs this week.

We can confirm that Sol Pais is deceased. We are grateful to everyone who submitted tips and to all our law enforcement partners for their efforts in keeping our community safe.

Pais was on the run after making threats and comments about the infamous 1999 Columbine shooting and was believed to be fascinated with the perpetrators. The woman was not thought to be threatening any school specifically, but authorities believed she posed a credible threat.

Also on rt.com
‘Armed & extremely dangerous’: 20 US schools on lockdown as FBI hunt for ‘Columbine-infatuated’ teen


Authorities believed that Pais had flown from Miami to Denver on Tuesday with plans to carry out her own Columbine-style attack. She immediately purchased a gun and ammunition when she arrived in Denver, they said.

As many as 30 armed officers including SWAT team were searching an area in the Arapaho National Forest as part of the search on Wednesday morning. One woman, who was hiking in the area, told CBS4 that she was told to leave the area because “a naked woman matching the description with a gun was spotted in the area running through the woods.”

The 18 year-old was reportedly found near the Echo Lake Lodge at the base of Mount Evans in Clear Creek County.