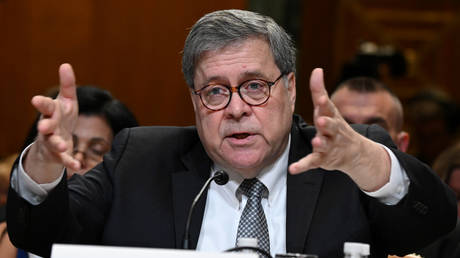 Attorney General William Barr told a Senate committee that he believes FBI “spying did occur” on the Trump campaign in 2016. Trump himself has called on Barr to investigate the FBI’s counterintelligence probe.

Elaborating on an earlier statement that he is assembling a team to investigate anti-Trump bias in the FBI’s 2016 probe into the Trump campaign, Barr told a Senate appropriations subcommittee on Wednesday that he believes “spying did occur,” and will investigate whether that surveillance was “predicated.”

“I have an obligation to make sure government power is not abused,” Barr added.

By “predicated,” Barr likely means he will look into whether the evidence used to kickstart the FBI’s 2016 investigation was solid. Republicans have long claimed that this evidence – namely a dossier of anti-Trump gossip collected by a British spy working for Democratic Party operatives – was flimsy and insufficient to warrant an investigation.

BREAKING: AG Barr announces that his investigation of Spygate will cover all Congressional and IG investigations, and will conduct comprehensive review on the spying on a presidential campaign by the Obama admin, and directly compared it to domestic spying during the Vietnam War

Trump also asked Barr to investigate the probe’s origins, a request that Barr seems willing to heed. At a House appropriations committee hearing one day earlier, Barr said that he will review “all the aspects” of the FBI investigation, presumably including whether or not the agency actively worked to keep Trump out of the White House.

Barr told representatives that the Justice Department is currently wrapping up an investigation into whether the FBI misused the Foreign Intelligence Surveillance Court to obtain a warrant to wiretap Trump campaign adviser Carter Page. The warrant was obtained based on evidence presented in the so-called ‘Steele Dossier’, a piece of unverified and Democrat-funded opposition research that former FBI Director James Comey admitted he knew was unverified at the time it was presented to the FISA court.

Also on rt.com
Those who started Russia probe were attempting a ‘coup’, AG must start investigation – Trump


A report on the FBI’s alleged FISA abuse is expected in “May or June,” Barr told the House hearing.

The information contained in the Steele Dossier, as well as rumors gathered by FBI agents during a 2016 counterintelligence investigation codenamed ‘Crossfire Hurricane’, were used to kickstart the ‘Russiagate’ investigation in 2017, handed over to Special Counsel Robert Mueller after Director Comey’s firing that May. Two years later, Mueller’s report concluded that Trump did not collude with Russia.