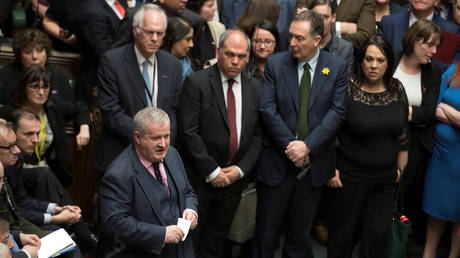 SNP Westminster leader Ian Blackford has delivered a stinging attack on the character of PM Theresa May in the House of Commons, calling her Brexit speech in wake of the EU summit “Trumpesque” and asking if the MPs votes “count.”

SNP Westminster leader Ian Blackford delivered a stinging attack on the character of PM Theresa May in the House of Commons, calling her Brexit speech in the wake of the recent EU summit, as “Trumpesque.”

Responding to May’s Brexit update statement, Blackford claimed that the current “crisis” the UK found itself in, was “one of the prime minister’s own making.”

He branded her Brussels speech, which she gave on Thursday as “ill-judged,” claiming it pitted parliament against the people, demonstrating “raw populism” and likening her performance to a certain US President.

Trying to put herself on the side of the people and blaming parliamentarians. It was Trumpesque.

In a reference to her twice defeated Brexit deal, by historic margins, Blackford asked May: “Do our votes count? Are they binding on the government or is this just a puppet show?”

Echoing the sentiments of Labour leader Jeremy Corbyn, Blackford insisted the British public were embarrassed by her Tory government, imploring the PM to put any deal to the people in a second referendum.

Addressing MPs, May told the House that she concedes there is no chance of her deal getting through on a third “meaningful vote,” and as a result, she would be dumping any attempt to push it through the House of Commons.