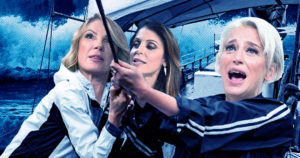 Going down with the ship in style

For a number of years now I’ve been confounded by watching many of the straight upper-middle class women in the United States appearing to slide backwards in time into much more traditional roles. Why do so many women still do the heavy lifting of childcare, grocery shopping, housekeeping and cooking? Why do so many of them put the needs of their male partners and bosses first and their own needs last? Why have so many of them whole-heartedly embraced sports when I doubt that most of them were not sports fanatics before they were in relationships with men who are? These were the roles we struggled to break out of in the 60’s and 70’s. Yet in the seven cases I will present I will describe six women who consider themselves feminists. How can we explain this?

What does it mean to be a feminist in the United States today? Historically we have had liberal feminists and radical socialist feminists, but what do we make of the Pink Pussycats? Granted, they are not radical feminists, but are they liberal? The term “liberal” has become a moth-eaten word used by both sympathizers and demonizers. For now, we will put the word aside. First I will describe experientially what second-wave feminism attempted to do. Then I will describe the lives of seven women I know, six of whom claim to be feminists and certainly see themselves as Pink Pussycats. Finally, I will address the relationship between the Pink Pussycats and…