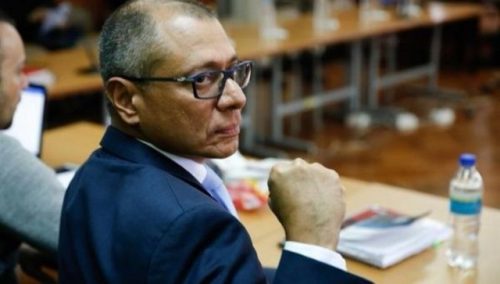 With a positive balance after 10 years as president of Ecuador, Rafael Correa helped Alianza País emerge victorious in the second round of the presidential elections in early 2017. But a complete turnaround was soon on the cards: newly elected president Lenín Moreno started to attack the legacy of the Citizens Revolution that had gotten him elected. An important part of Alianza País, faithful to the social policies of “Buen Vivir” (“Good Living”), disapproved of this. Then, vice-president Jorge Glas, who could be counted among these critical voices, was removed from his post and again put in the media spotlight, accused of corruption amidst the Odebrecht affair. A mere coincidence or fate? After four months of pre-trial detention, in January 2018 Jorge Glas was sentenced to six years in prison. Silvia Glas, economist and sister of Jorge Glas, granted an exclusive interview to Investig’Action, in which she exposes the “lack of evidence” for the verdict and calls for breaking the media blockade surrounding this case.

Alex Anfrons: On May 24, 2017, a new government took office in Ecuador with Lenín Moreno as president and Jorge Glas as vice-president. When does this winning partnership sour?

Silvia Glas: We can point to two important moments: on August 2nd, 2017, in a public letter, Jorge Glas denounces alleged irregularities in the governance of Lenín Moreno. Moreno then relieved Glas of all his legally mandated duties on August…