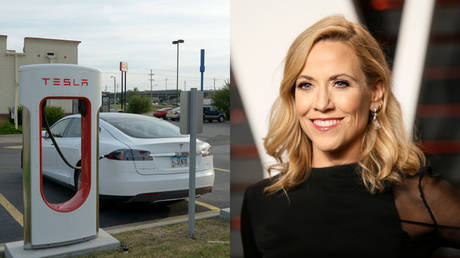 Like Steve McQueen, all that award-winning musician Sheryl Crow needed was a fast machine to escape the parking lot where she was stuck desperately asking Twitter for help because her Tesla’s screen wouldn’t turn on.

While the US singer-songwriter might like Chevrolet, she apparently owns a Tesla, as she let her 319,000 Twitter followers know Wednesday when she couldn’t get the car’s dashboard screen to boot. The call for help included the hashtag #stuckinaparkinglot indicating she had been left stranded… hopefully she had no other plans.

It seems that she has someone to blame for the breakdown, asking her audience if she could get a refund on the much hyped electric vehicle. While a couple of people did offer advice on getting the monitor to reset, she was mostly met with a barrage of puns, song references and light-hearted mockery over her predicament.

Everyday is a winding road… or not.

a (car) change would do you good

Others responded with some more practical, if snide, advice… although a few of the “solutions” involved abandoning the $75,000 automobile.

Call Roadside Assistance – I’d help you get some immediate help, but I don’t know where ‘there’ is …

And, as you might expect, the comments also had a number of trolls, ever ready to find the humor in the misfortunes of their fellow man:

have you tried getting out and getting back in again?

Eventually, Tesla CEO Elon Musk himself stepped in, tweeting the pop star helpful instructions which solved the issue and got her back on the day’s winding roads.

Change your screen preference from night mode to auto

The singer took the comments in her stride, tweeting thanks to those who offered her long-distance roadside assistance, and even complimenting the “creativity” of the responses.

Problem solved! LOVED all of your creative responses. Best one was suggesting my kids take a look… which would have been helpful since my kid was the one who changed the settings / caused it to go black in the first place! I knew I should have interrupted school…

Elon Musk’s premier electric car has been met with a series of high-profile PR nightmares this month. Just a few days ago, celebrity jeweler Ben Baller posted on instagram from inside his Tesla model X which he couldn’t seem to get out of. Like Sheryl Crow, he mentioned that a refund might be in order.


A day later, a group of Chinese researchers from Keen Labs released a video of them hacking the autopilot of a Tesla Model S and forcing it to drive into oncoming traffic. While Tesla lovers may have promised they would never give up on the vehicle, it seems they may have to try to love again.