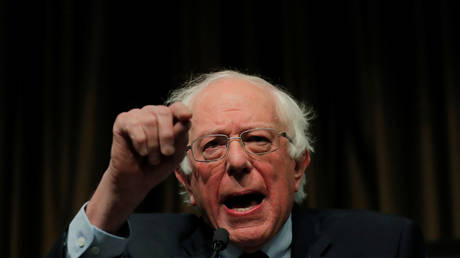 Senator Bernie Sanders has written a scathing letter to the board of the Center for American Progress accusing it of being a “destructive” force in the “critical mission to defeat Donald Trump.”

The accusations were prompted by an article and video published by one of CAP’s projects, ThinkProgress, which claimed Sanders is a millionaire but wishes to downplay his finances because it’s “very off-brand and embarrassing.”

In the letter dated April 13 and published by the New York Times, Sanders takes aim at both CAP and ThinkProgress for alleged smears against him as well as fellow progressive Democratic candidates for 2020 Elizabeth Warren and Cory Booker, and suggests that this divisive approach to Democratic campaigning is going to damage the party’s push to take the presidency from Trump.


He specifically criticized the recent ThinkProgress reports for having “dishonestly attacked me for hypocrisy in my effort to address income inequality in America.”

Sanders also highlights his concern over the CAP’s corporate donors and the possible leverage or influence that comes with that finance.

“Center for American Progress leader Neera Tanden repeatedly calls for unity while simultaneously maligning my staff and supporters and belittling progressive ideas,” Sanders writes. “I worry that the corporate money CAP is receiving is inordinately and inappropriately influencing the role it is playing in the progressive movement.”

“This counterproductive negative campaigning needs to stop,” the letter closes. “The Democratic primary must be a campaign of ideas, not of bad faith smears.”

The CAP was founded by John Podesta, who later chaired Hillary Clinton’s 2016 election campaign. The editor of ThinkProgress has denied that the CAP had any role in its coverage of Sanders.