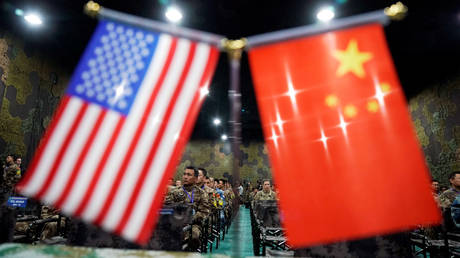 The US should step away from belligerent rhetoric and wind down its wasteful militaristic policies, former congressman Ron Paul told RT, after its Secretary of State accused Beijing and Moscow of bankrolling the Venezuelan leader.

The growing economic and military might of China keeps on producing knee jerk reactions in Washington, whose multifaceted approach to curbing the Asian giant’s expanding global influence is leading the US down the confrontation route with Beijing. While the US is notorious for challenging Beijing in the Pacific, just last weekend Secretary of State Mike Pompeo arrogantly accused Beijing of “bankrolling” Nicolas Maduro’s regime in Venezuela and helping “precipitate and prolong the crisis in that country.”

Also on rt.com
‘Pompeo lost his mind’: Chinese diplomat hits back at US attacks on Beijing’s investments in Chile


While China said that “Pompeo has lost his mind and gone too far,” the former representative for Texas told RT that Washington is seeking “scapegoats” for their failed policies in Venezuela and elsewhere – at the same time challenging China’s financial influence in the region.

The future of US-China relations is shaky … we as a country need scapegoating for our policies.

“[Pompeo] is upset because China is getting the upper hand financially, investment-wise, and there is always a concern about whose investments – or armies- are going to control the oil,” the politician explained.

So the purpose of Pompeo and the neocons is to blame somebody whether it is China or Russia.

Ever since the White House recognized Venezuela’s self-proclaimed ‘interim leader’ Juan Guaido, the US has warned other nations, including China and Russia, against maintaining relations with the government of President Nicolas Maduro. Washington, Paul believes, should step away from aggressive diplomacy and also quit wasting money on “militarism” by hiding behind imaginary threats.

“We need to change the perceptions to show that we do not need to spend more money in the military industrial complex because it will not do us any good,” Paul said.