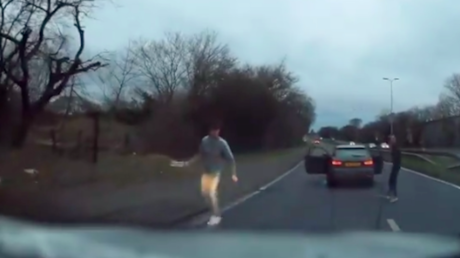 Two men staged a bizarre, and ultimately futile, road rage attack on a rival vehicle while driving around Essex, England, forcing the second car to pull over several times before the attackers simply ran at it on foot.

Essex Police released dashcam footage captured by the car that the pair decided to focus their energies on, but criminal masterminds they were not. The video, some of which has been sped up, shows how the men stopped their car in front of their target three times, but each time the car behind simply waited a moment and then overtook them with ease.

The Audi driven by the road rage pair was reported stolen, according to police.

On a couple of occasions, the two men in the attacking car jump out of their vehicle and try to rush on foot at the car behind, making it even easier for the other car to drive off down the road and escape their attentions. At one point, one attacker even lobs a bottle at the driver’s door in a final ineffectual move.

The incident was recorded in January, but the footage was released by police on April 5 as part of a public appeal as the pair remain at large. Some Twitter users were full of praise for the driver who was subjected to the repeated attacks for remaining calm throughout their strange ordeal.

Got to applaud the driver for avoiding them each time. Not sure I’d have reacted so calmly.

He was clearly being threatened by neanderthals. He clearly tried to get away from them and avoid confrontwtion. I hope you would have been understanding if he had run one over to get away.

An incident !!!! That’s several incidents to me, driver must have been petrified 🤬