In the current era of Trump, much of American society finds itself frustrated, angry, and traumatized by an authoritarian president whose leadership is being perceived increasingly as illegitimate. Oddly, a large reason for Trump’s success in getting elected in the first place as well as his continued seemingly inconceivable support is largely due to the illusion that he is anti-authoritarian and will shake things up and create change. 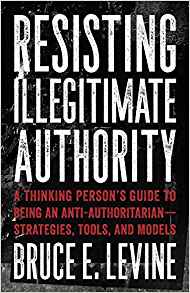 Trump, of course, is no anti-authoritarian. Rather, he is an authoritarian who resists power only when he doesn’t have it. Anti-authoritarians challenge and resist all forms of illegitimate authority. Bruce E. Levine, in his newly released book, Resisting Illegitimate Authority: A Thinking Person’s Guide to Being an Anti-Authoritarian, tells us that the traits of an anti-authoritarian include a compulsion to speak out against cruelty and illegitimate authority no matter what the political cost, a willingness to sacrifice one’s own freedom for the cause of freedom, a compulsion for truth-telling, and a repulsion with hypocrisy. In his profiles of several U.S. anti-authoritarians, Levine details how, from Thomas Paine to Ralph Nader, many of them experienced great rejection, marginalization, and suffering for their views.

Trump so often lies, doesn’t know what he’s talking about, and has engaged in so many cruel and hypocritical acts that not only is there an anti-Trump resistance, but Trump may actually be the