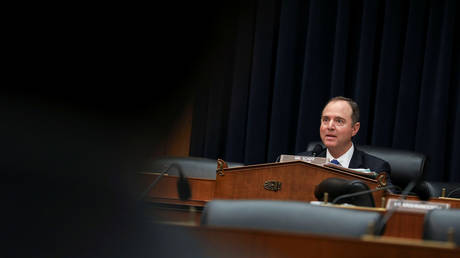 The House Intelligence Committee on Thursday turned into a judgment day for the Democrats’ chief Russiagate pusher Rep. Adam Schiff, as Republicans branded him a “McCarthyist” and demanded his resignation as committee chairman.

Meeting for the first time since news broke last weekend that Special Counsel Robert Mueller found no evidence of “collusion” between the Trump campaign and Russia in 2016, the Republicans used the opportunity to jointly sign a letter calling for the Russia-obsessed lawmaker to step down as intelligence committee chairman.

.@AdamSchiff repeatedly claimed that there was “significant evidence” of collusion between the President and Russia. The job of the House Intel chairman is to uncover the facts, not fabricate them. Republicans on the committee agree that it’s time he step down. pic.twitter.com/2ocZ6EaoC3

The letter slammed Schiff, accusing him of being at the center of a “well-orchestrated media campaign” to sell the collusion narrative and recalled that he had made claims during multiple television appearances that there was “more than circumstantial evidence” of collusion.

The letter also said the California Democrat had “damaged the integrity” of the committee and his continued promotion of a “demonstrably false” narrative post-Mueller report was “alarming.”

But despite a total lack of evidence on his side, Schiff was in no mood to back down on his “collusion” theories and the hearing quickly turned into a wild back and forth with Republicans who repeatedly accused him of being a liar who used McCarthyite tactics in his personal quest to bring down Trump. At one point, Schiff even switched off the microphone of Rep. Mike Turner who had been asking him to take back his baseless claims.


Turner later told Schiff that he “behaves as if your fellow members of this committee are you enemies, you behave as if the president is your enemy — and in true McCarthy fashion, you act as though you are the only one who is capable of protecting this nation.”

But proving that anti-Russia sentiment is not the reserve of the Democrats, Turner also accused Schiff of advancing Russian President Vladimir Putin’s “agenda” by fuelling “divisiveness” among Americans – echoing accusations rampant in US media that Russia is hell bent on “sowing discord” and turning Americans against each other.

Trump himself even weighed in on Twitter, but went further, saying Schiff had “spent two years knowingly and unlawfully lying and leaking” and should be “forced to resign” from Congress altogether.

Congressman Adam Schiff, who spent two years knowingly and unlawfully lying and leaking, should be forced to resign from Congress!

Democrats have stuck by Schiff so far, with House Speaker Nancy Pelosi saying earlier this week that calls for his resignation were “absolutely ridiculous.”