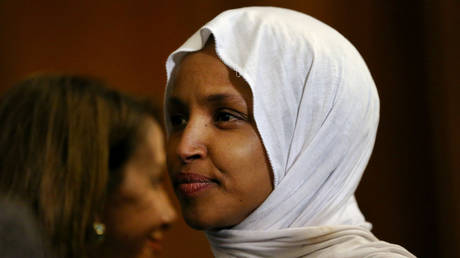 US Representative Ilhan Omar called on God to forgive her detractors after President Donald Trump mocked her criticism of Israel on the day a supporter of his was charged with death threats against her.

Trump, mentioned the freshman Democrat during a speech to the Republican Jewish Coalition in Las Vegas. He gave a “special thanks” to Omar before pausing and continuing in a sarcastic tone: “Oh, I forgot. She doesn’t like Israel. I forgot. I’m so sorry.”

Omar drew an avalanche of accusations of anti-Semitism last month after criticizing the influence of the pro-Israel lobby group AIPAC on American politics. Critics said she used Jew-hating tropes, forcing her to apologize to those, who were offended by the way she expressed her views. While never mentioned by name, she seemed omnipresent during last week’s AIPAC gathering, with senior speakers across the political aisle making references to the controversy one after another.

Also on rt.com
‘Not all about the Benjamins’: Netanyahu throws shade at Omar in AIPAC speech


The lawmaker responded to Trump’s Saturday remark by quoting the words of Prophet Muhammad cited in the hadith – Islam’s revered recollections of the life of the prophet. Omar is a refugee from Somalia and a Muslim woman representing Minnesota’s 5th congressional district.

My Lord, forgive my people for they do not know. https://t.co/mtEzMrCLKF

Incidentally, on the same day the US Attorney’s Office said it had charged Patrick Carlineo, 55, from upstate New York, with threatening the assault and murder of Omar. Carlineo is accused of calling the representative’s office on March 21, calling her “a f**king terrorist” and saying he will “put a bullet in her f**king skull.”

When questioned by the authorities, Carlineo said he was “a patriot, that he loves the president, and that he hates radical Muslims in our government,” court papers said. Omar, he claimed, “supported Hamas and the Muslim Brotherhood.” If convicted, he faces up to ten years behind bars.