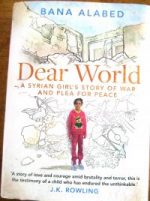 The book Dear World: A Syrian Girl’s Story of War and Plea for Peace was published in October 2017. It is purportedly written by a Syrian girl, Bana Alabed, with the help of her mother and an editor. The book is being prominently promoted in the US and UK and is anticipated to be a big seller this coming Holiday Season.

Bana Alabed is an 8-year-old Syrian girl who rose to fame in 2016 when a Twitter account was set up in her name and she started tweeting in fluent English from east Aleppo as it was under bombardment by Syrian and Russian forces trying to dislodge insurgents.

The first tweet in Bana’s name appeared on 24 September 2016. It simply read, ‘I need peace’. The Twitter account soon had tens of thousands of followers, among them J. K. Rowling, the author of Harry Potter. It was later observed in a video that 7-year-old Bana knew very little English and was being prompted or told what to say.

The book begins with a quote from The Diary of Anne Frank, thus inferring that there are parallels between Bana and the famous Dutch Jewish girl who was forced to hide from the Nazis in the Second World War. If Bana is meant to represent Anne, then presumably the Syrian and Russian governments are meant to represent the Nazis. This is misleading. Several brave Dutch people hid the young Anne and her family from the Nazis. In Syria, Islamist militants, such as those in east Aleppo have targeted Syrians simply because they…