British pro-Israeli groups have attacked Labour for vowing to freeze UK arms sales to Israel should they come to power, warning that the policy would threaten British assets in the region.

Both the Board of Deputies of British Jews and Labour Friends of Israel attacked the move in comments published in the Jerusalem Post.

Marie van der Zyl, the president of the board of deputies, insisted that UK arms sales to Israel were a crucial part of “military cooperation” between the two countries. She described Labour’s position as “irresponsible” and “misguided,” warning the move could “endanger British civilians and assets in both the Middle East and in the UK.”

Van der Zyl spoke of the “unique turmoil” in the region, adding: “It is absolutely right to provide arms for the country’s defence,” and that an arms embargo could threaten British jobs and security.

“Decreasing military cooperation, including arms sales, could endanger British civilians and assets in both the Middle East and in the UK.”

According to Campaign Against Arms Trade (CAAT), the UK has made record profits this year from arms sales to Israel.

Defense contractors in fact made at least £221 million ($294 million) last year from deals with Tel Aviv, a significant increase compared to £86 million in 2016, CAAT claims. 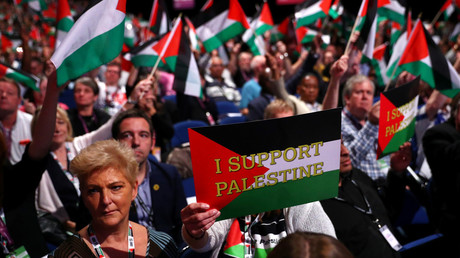 Jennifer Gerber, the director of Labour Friends of Israel – a Westminster-based lobby group that has been highly critical of Jeremy Corbyn’s views on Israel and Palestine – called the motion “deeply disturbing but sadly unsurprising.”

There were scenes of jubilation during the debate on Palestine at Labour’s conference, which saw the party agree to call a halt on UK arms sales to Israel, with many in the crowd raising Palestinian flags aloft.

Over the summer, the party was riven with arguments over anti-Semitism, with the issue often being conflated with debates over Israel-Palestine. Corbyn faced a string of accusations of anti-Semitism – a claim he has stringently denied – from some British Jewish groups and even one of his own MPs.

Corbyn resisted calls to quit over the issue. During his speech to the Labour Party conference, he both reiterated his solidarity with Jews over anti-Semitism and criticisms of the Israeli government.

The party’s motion calls for an “independent international investigation into Israel’s use of force against Palestinian demonstrators,” an “immediate and unconditional end to the illegal blockade and closure of Gaza,” and “a freeze of UK Government arms sales to Israel.”

Over 160 Palestinians have been killed and thousands injured in the Great March of Return protests along the Gaza border with Israel, which began in March and continue daily. Israel maintains the blame for the deaths rests squarely on Islamic resistance movement Hamas, the elected government in Gaza, which both Israel and the US consider a terrorist group.

Labour Conference 2018: Some good policies but will Corbyn’s compromises cost the party dear?

Lanning said: “We have witnessed extraordinary scenes of solidarity today and the Labour Party has done the right thing by recognising the longstanding injustice of Israel’s violation of Palestinian rights.

“This is an important step forward in building solidarity with Palestinians within Labour and we hope the leadership will listen to the will of the party on this issue.”