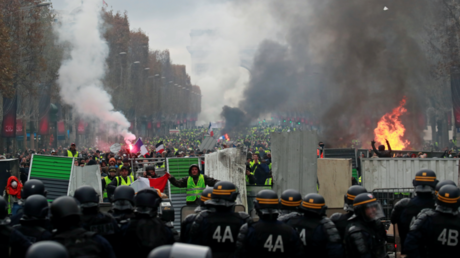 Donald Trump has been described as a narcissist by some, and he isn’t doing himself any favors by making everything about him and the US. He’s even found a way to make French demonstrations over rising fuel prices about America.

The US president took to Twitter on Sunday to address protests in France over rising fuel costs, which turned violent in Paris and led to tear gas and water cannon being deployed by police.

“The large and violent French protests don’t take into account how badly the United States has been treated on Trade by the European Union or on fair and reasonable payments for our GREAT military protection. Both of these topics must be remedied soon,” he tweeted.

He then went on to toot his own horn for falling oil prices. “Thank you, President T,” he wrote.

So great that oil prices are falling (thank you President T). Add that, which is like a big Tax Cut, to our other good Economic news. Inflation down (are you listening Fed)!

The internet, unsurprisingly, had a few things to say about his most recent tweets.

You are an amoral monster who thrives on the pain and suffering of others. Astounding how you could turn this unfortunate #Paris chaos into your typical narcissistic “I’m the victim” bullshit. You are so unfit for office is staggering… #Trump

Not everything in the world is about you or the US.

Some were left completely blown away as to why Trump was dragging the US and himself into a French domestic matter.

Bizarre. Of course they don’t, because these protests have zero to do with the US. They concern France and French citizens

The French are paying over $7 a gallon for gas. It has NOTHING TO DO WITH YOU.

One person attempted to offer a bit of logic as to why Trump was getting involved.

trump has had so many protests against him since being elected that now he thinks if there’s a protest anywhere in the world, there must be a connection to him & something he has done.

And a French person took to Twitter to point out that while citizens are angry at President Emmanuel Macron, everyone in France seems to at least agree on one thing: “At least we don’t have Trump.”

I don’t know why you’re talking about something you don’t understand, Donald. The French people are mad at Macron and that is our right. But EVERYONE agrees to say “at least, we don’t have Trump !”. pic.twitter.com/kqs7H7yPtg

Trump’s tweets come as his relationship with Macron remains at a low point, after Macron announced his support for a European army to protect the continent against the likes of China, Russia, and “even the United States of America.”

The US president responded by slamming Macron and his “low approval rating” on Twitter, and went on to say that Germany (whose chancellor, Angela Merkel, also supports the idea of a European army) was France’s problem during both World Wars – not China, Russia, or America.

The Sunday tweets come just days after Trump was asked a common Thanksgiving question by a reporter: “What are you thankful for?” His answer was, well, himself.

“I’ve made a tremendous difference in the country,” he confidently told reporters.