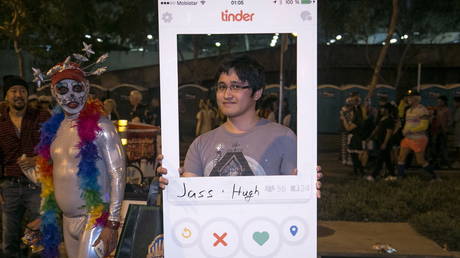 Dating app Tinder is addressing the problem of users faking their vital stats on its platform with the rollout of a ‘height verification’ feature – but April Fool’s is on Monday, and Twitter thinks they might not be sincere.

Tinder tweeted a video touting the new feature – “the thing you never asked for, but definitely always wanted” – accompanied by a blog post shaming users for “height fishing” and reminding them that “honesty is what separates humans from sinister monsters.”

The clip shows a frustrated user attempting to lie about his height twice, only to be thwarted by the app. In the end, he finally accepts the reality that he is, in fact, 5’9″ – on a scale that seems to confuse imperial and metric measurements by assuming there’s 10 inches to a foot (which would actually mean he is below 5 real-world feet tall, thus explaining why he is so upset). For this, Tinder awards him with a “height verification badge.” The blog further explains that all users need to do is post a picture of themselves next to “any commercial building” and their “state-of-the-art verifying” will do the rest.

A few (presumably tall) users thought it was a fabulous idea.

Finally. I’m so sick and tired of matching with a girl who says shes 5″4 but when I meet her in person shes actually 8 stories tall and a crustacean from the plazazoic era who needs about three dollars and fifty cents

Tall as hell and happily planning the wedding. Thank you, Tinder.

Others were less enthusiastic.

I wasn’t getting any matches before and now you’re absolutely sabotaging every hope I have for some in the future. This is disgusting and I will not stand for it.

As a tall man who never had to worry about my height, I reject this. Get a soul verification system while you’re at it.

Many thought Tinder should have focused on weightier issues first.

People are going to lie regardless, but while we’re at this we need to clarify what “curvy” means.

What about weight-fishing? How about not letting fatties not show their full body.

Weight verifying would be fantastic as well if we’re giving in to absurd qualifiers.

or… other problems of misrepresentation.

Now that you’ve finished this, go on with developing a penis size verification feature.

Should this have gone out on Monday, chaps?


Tinder’s 50 million users have made it the US’ most popular dating app, and its “Single – not sorry” tagline presents itself as a battle cry for the millennial generation, who make up 79 percent of users and are waiting longer than ever to marry and start families – if they choose to at all. But 2018 data from the General Social Survey suggest this brave new world isn’t benefiting them in the bedroom: nearly one in four Americans aged 18 to 29 reported not having sex in the past year, a figure that has more than doubled in the last 10 years.