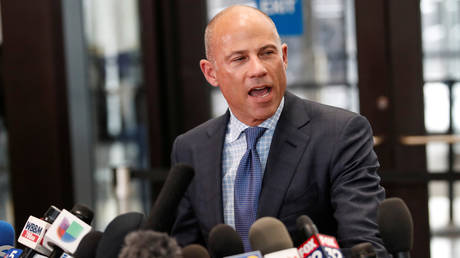 US lawyer Michael Avenatti has been arrested and charged with bank fraud and extortion. Prosecutors claim Avenatti threatened to shake down sportswear giant Nike for $20 million.

Instead, the hotshot lawyer found himself slapped in cuffs and arrested in Manhattan on Monday, at the offices of a law firm where he was due to meet with representatives of Nike to discuss his demands. Avenatti is accused of criminal conduct in two separate cases in New York and California.

Prosecutors in the Southern District of New York say Avenatti had threatened to harm Nike’s public image unless the sportswear firm paid him more than $20 million in hush money.

“I’m not f***ing around with this,” Avenatti allegedly told a Nike lawyer last week, in a phone call monitored by the FBI. “I’ll go take $10 billion off your client’s market cap….a few million dollars doesn’t move the needle for me.”

Geoffrey Berman, US Attorney for the SDNY, said that Avenatti did not act as a lawyer, but engaged in an “old-fashioned shakedown.” Mark Geragos, a CNN legal analyst and lawyer for alleged hate-crime hoaxer Jussie Smollett is believed to be Avenatti’s unidentified co-conspirator, according to the Wall Street Journal.

In California, Avenatti is accused of embezzling a client’s money to pay for his own debts and the debts of his coffee store business, Global Baristas. He also allegedly used bogus tax returns to secure millions of dollars in loans from a Mississippi bank to cover Global Baristas’ expenses.


“A lawyer has a basic duty not to steal from his client,” Nick Hanna, US Attorney for the Central District of California said. Hanna called Avenatti “a corrupt lawyer who instead fights for his own selfish interests by misappropriating close to a million dollars that rightfully belonged to one of his clients.”

If convicted of both fraud charges in California, Hanna said Avenatti will face a statutory maximum sentence of 50 years in prison.

Avenatti, having shot to fame representing Stormy Daniels against President Trump, secured hundreds of appearances on news networks and attained household name status with his unrelenting criticism of Trump. He was at one point even talked about as a serious contender for the presidency in 2020.

A failed attempt to block the confirmation of Supreme Court Justice Brett Kavanaugh last fall set the stage for his fall from grace, however, and Avenatti’s arrest was met with cheers and jeers from his former opponents and critics, most notably President Trump’s son Donald Jr.