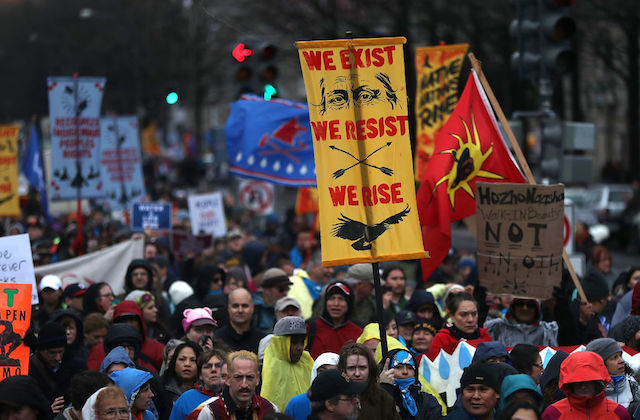 WASHINGTON, DC – MARCH 10: Protesters march during a demonstration against the Dakota Access Pipeline on March 10, 2017 in Washington, DC. Thousands of protesters and members of Native nations marched in Washington DC to oppose the construction of the proposed 1,172 Dakota Access Pipeline that runs within a half-mile of the Standing Rock Sioux reservation in North Dakota. (Photo by Justin Sullivan/Getty Images)

The climate crisis is upon us. It seems that every report on climate conditions has one thing in common: things are worse than predicted. The World Meteorological Report from the end of October shows that Greenhouse Gases (GHGs) are rising at a rapid rate and have passed 400 parts per million. According to Dr. Kevin Trenberth of the National Center for Atmospheric Research, “the changes we’re making today are occurring in 100 years, whereas in nature they occur in 10,000 years.”

The United States is experiencing a wide range of climate impacts from major hurricanes in the South to unprecedented numbers of wildfires in the West to crop-destroying drought in the Mid-West. In October, the General Accounting Office reported that the US has spent over $350 billion in the last decade on disaster relief and crop insurance, not counting this year’s hurricanes. These costs will continue and rise.

We are past the time to make a major commitment to the transformation we need to mitigate and adapt to the climate crisis. Imagine the benefits that such a…