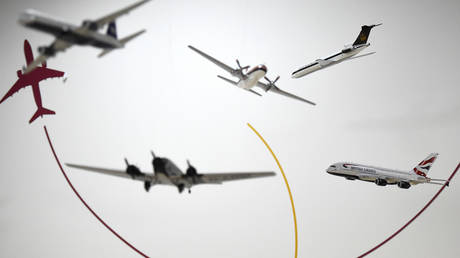 Passengers aboard a British Airways (BA) flight to Dusseldorf were understandably surprised to find themselves not only in the wrong city, but the wrong country, when their plane landed in Edinburgh, Scotland.

When the pilot announced that the early morning flight from London City Airport was nearing Edinburgh, passengers initially thought it was a joke. But the commander was being perfectly serious.

The flight crew themselves only figured out things were amiss when they asked the confused passengers to raise their hand if they had planned to go to Dusseldorf, at which point everyone on the plane raised their hands.

The airline claims that the pilot hadn’t gotten lost and what happened was a “mix-up of flight schedules” which had put the plane on the wrong path. It also assures the passengers were never at risk.


Frequent flier Sophie Cooke told the BBC that the plane sat on the runway for nearly two hours before taking off toward its actual destination, leaving the angry passengers stuck in the stuffy cabin and, more importantly, without snacks.

“We have apologised to customers for this interruption to their journey and will be contacting them all individually,” BA said in a statement.

We’re sorry for any inconvenience this has caused. As we’ve previously advised we don’t have currently have any information on this. However, we do know that there is an estimated departure at 10:30. Kieran

While some disgruntled passengers took to social media, others reading about the incident were baffled at how no one had noticed the error. After all, navigational instruments aside, there were certainly a few tell-tale signs the plane was not even headed in the right direction.

Despite the company’s statement, some people had their own imaginative explanations for what caused the mix-up.

The pilot had his map upside down. It happens, don’t be afraid to admit it.

While no one had signed up for a visit, some friendly Scots suggested that, as long as the confused passengers were in the area, they might as well stop to smell the Haggis before heading to mainland Europe.

It’s a lovely spring day in Edinburgh. Stay here. The beer’s good, the locals are friendly (ye’ll have had yer tea), the scenery’s magnificent and our tourist tax isn’t yet in operation.