Here it goes again! Several countries of Oceania (also known as South Pacific Nations), or however you want to call that vast, beautiful but thoroughly devastated part of the world, have voted “for Israel”, “for the United States’ proposed resolution at the United Nations”, and therefore, “against Palestine”.

The United Nations General Assembly has voted by a huge majority to declare a unilateral US recognition of Jerusalem as Israel’s capital “null and void”.

At an emergency session of the General Assembly on Thursday, 128 countries voted in favour of a resolution rejecting US President Donald Trump’s controversial decision on December 6.

Nine countries voted against, while 35 abstained.

Trump had earlier threatened to cut aid to UN members who would vote against his decision.

Did scarcely inhabited island-nations that are lost in the middle of a tremendous body of water, go crazy? 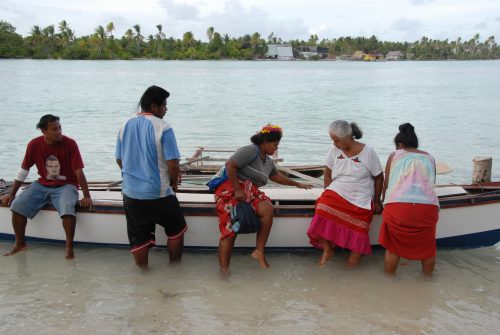 Before Crossing in Kiribati

After all those horrific nuclear experiments committed there, against their people, by the United States, France and the UK; could local people sincerely believe that the truth as seen from Washington is the only legitimate truth on Earth?

After the naked modern-day colonialism, which is being implemented by Australia, New Zealand, and France, and, of course, by the United States, have the people of Polynesia, Melanesia and Micronesia become blind?

After total dependency, after…