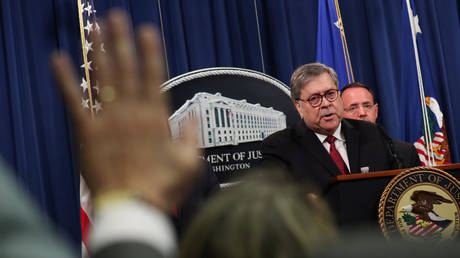 With Attorney General WIlliam Barr once again emphasizing the Mueller report’s “no collusion” conclusion, some journalists are accusing Barr of protecting the president, without a leg to stand on.

Barr’s press conference – held ahead of the publication of a redacted version of Mueller’s ‘Russiagate’ report – contained a number of bombshells that drove a final stake into the ‘Russian collusion’ conspiracy theory. No American colluded with Russia, President Trump cooperated fully with the investigation, and the White House did not ask for any redactions in the final report.

Nevertheless, some Russiagaters in attendance couldn’t accept defeat. One reporter accused Barr of protecting Trump, after the attorney general commented on the “unprecedented” cloud of investigation and media speculation hanging over the first two years of his presidency.

“Here you have remarks that are quite generous to the president,” the reporter began, “including acknowledging his feelings and his emotions. So what do you say to people on both sides of the aisle who are concerned that you’re trying to protect the president?”

“Well, actually the statements about his sincere beliefs are recognized in the report,” Barr shot back, “so I’m not sure what your basis is for saying I’m being generous to the president.”

“You said he faced an ‘unprecedented situation,’” the reporter continued, before Barr interrupted.

“Well is there another precedent for it?” he asked.

“Okay, so ‘unprecedented’ is an accurate description then, isn’t it?”

Unless Bill Barr — a former Attorney General under George H. W. Bush and a widely esteemed member of the DC legal establishment — is one of the most blatantly sociopathic liars on the face of Earth, the Trump/Russia conspiracy theory is officially dead

The media who pretend to have veneer of objectivity, trashing one of the most experienced and respected legal thinkers in America, reveal themselves once again.

Did anyone else notice that none of the reporters asked Barr about Russia collusion? As predicted, they have dropped the narrative completely in favor of Weissman’s wild obstruction conspiracy theories

Another reporter wondered why Mueller himself was not at the podium taking questions, even though Barr said five minutes earlier he would have no problem with Mueller testifying to Congress, as the Democratic Party’s leadership has demanded.

“He is required under regulation to provide me with a confidential report,” Barr replied. “I’m here to discuss my response to that report and my decision – entirely discretionary – to make it public, since these reports are not supposed to be made public.”

When another reporter in the room asked Barr whether he was “spinning” the report before its imminent release to the public, the attorney general stepped back from the podium, said a quiet “no,” and left the room, ending the press conference.


Democrats had earlier attempted to stop Barr’s pre-report presser, accusing him of generating a pro-Trump narrative on the report before its release. However, with Barr reading directly from the report, it is unlikely that the attorney general is covering up any ‘bombshell’ information on Trump.

Barr’s handling of the report has generated vastly different reactions on both sides of the political divide. President Trump took to Twitter to gloat that “For the haters and the radical left Democrats… Game Over.” Meanwhile, House Speaker Nancy Pelosi and Senate Minority Leader Chuck Schumer called on Mueller to testify before Congress, accusing Barr of “regrettably partisan” behavior.

That Democrats and the media would be reluctant to let go of the Russiagate conspiracy theory is hardly surprising. After all, cable TV networks and national newspapers have fed viewers a steady diet of conspiracy, conjecture, and outright falsehoods for almost two years now. Accepting the past and moving on can be difficult.