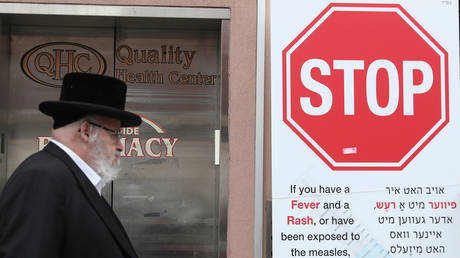 An Orthodox Jewish daycare has been shut by New York City’s Health Department after it violated a city order about the measles public health emergency, while 23 other daycares and yeshivas have received violation notices.

The United Talmudical Academy in the Haredi neighborhood of Williamsburg, Brooklyn failed to “provide access to medical and attendance records,” the health department said, which made it impossible to check whether the school has been excluding staff and students who aren’t vaccinated against measles.

A public health emergency was declared in four areas of Brooklyn last week to deal with the measles outbreak, the worst the city has seen since 1991. The areas affected are largely in Ultra-Orthodox Jewish communities.

All children over six months of age were required to get the measles-mumps-rubella (MMR) vaccine, and parents who didn’t comply could be fined $1,000. Schools were told to only accept vaccinated children and to keep medical and attendance records that authorities can have access to.

There have been 329 confirmed cases of the measles, a highly contagious disease, in New York since October, and 44 new cases since the emergency declaration last week. No deaths have been reported, but 25 have been hospitalized, with six sent to the intensive care unit. The health department is concerned more cases may occur as families gather for the upcoming Passover holiday.


Ultra-Orthodox Jewish communities are showing resistance to the vaccine drive, with information circulating that the jabs are ineffective or harmful. The Orthodox Jewish anti-vaccine group Parents Educating and Advocating for Children’s Health (PEACH) claims doctors hide evidence that vaccines are linked to swelling, paralysis, and death.

Vaccinations are also the subject of a heated, wider public debate, particularly since an erroneous paper in the Lancet in 1998 claimed to have found a link between the MMR vaccine and autism. The respected medical journal later retracted the publication.

Measles was essentially eradicated in the US by 2000, but there has been a spate of outbreaks as a result of people not vaccinating their children. In 2014, the Amish community in Ohio suffered an outbreak.