With the escalating doom of climate change hovering over us, it is tempting to push nuclear horror to the back of our minds.  To those of us who grew up in the 1950s, it was omnipresent.  Nuclear war could not exist without nuclear power and on April 26, 1986 the world experienced a form of nuclear horror it will never forget. 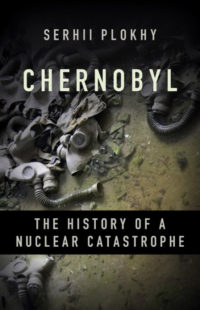 In May 2018, Basic Books released Serhii Plokhy’s “Chernobyl: The History of a Nuclear Catastrophe.”  It could well become the definitive story of that disaster.  Chernobyl will raise eyebrows.  The book features detailed interviews with key actors, meticulous research, and then a big “uh-ooh.”

Plokhy delves into the background of the infamous nuke, including its site selection in 1966, its location by the river and town both named Prypiat, and intense discussions over the type of reactor to build.  Should they construct the safer but more expensive VVER (Water-Water Energy Reactor) or the cheaper and more powerful RBMK (High Power Channel Reactor) which lacked a cement containment shield?

The author goes beyond looking at the people involved in building the plant and describes their mutual relationships and their interactions with construction problems and delays. …