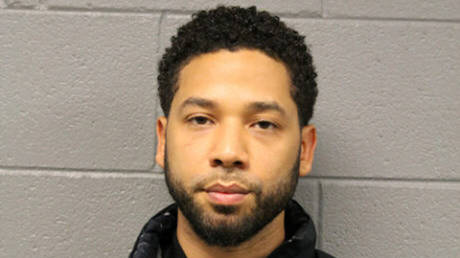 Jussie Smollett’s lawyer has explained the holes in the actor’s account of the “hate crime” he’s accused of staging by claiming his attackers – two Nigerian men who Smollett insisted were white – could have worn white makeup.

Smollett lawyer Tina Glandian has gone to impressive lengths defending her client in a Thursday interview on the Today Show. Claiming the disgraced Empire actor had “been victimized much more by what’s happened afterwards than what happened that night” when he was supposedly beaten up, draped with a noose, and doused in bleach, Glandian attempted to explain away her client’s absolute certainty that the dark-skinned, bodybuilding Osundairo brothers had been white.

“I was looking up the brothers and one of the first videos that showed up was one of the brothers in whiteface doing a Joker monologue with white makeup on,” Glandian said, adding that “it took me all of five minutes to Google” and complaining Chicago police had done “minimal investigation.”

While the attack – which crowned an increasingly implausible series of events with one brother supposedly yelling “This is MAGA country!” before walking away – was framed at the time as a “modern-day lynching,” Glandian said Smollett doesn’t want to press charges against the brothers, and that it wasn’t actually “that brutal.”

“The attack pales in comparison to the attack on him by the mayor, the city and the press,” she said, claiming Smollett “just wants to move on.”


The FBI is reviewing the dismissal earlier this week of 16 felony charges against Smollett by State’s Attorney Kim Foxx’s office. Smollett forfeited his $10,000 bond, but his record was expunged and he was not forced to admit his guilt in staging his own victimization. An investigation into the threat letter – complete with fake anthrax and a badly drawn noose – sent to Smollett at Fox’s Empire studio is ongoing.

Chicago Mayor Rahm Emanuel sent Smollett a bill for $130,106.15 to cover the cost of police overtime spent investigating the bogus hate crime. “My recommendation is when he writes the check, in the memo section he can put the word, I’m ‘accountable’ for the hoax,” Emanuel said.