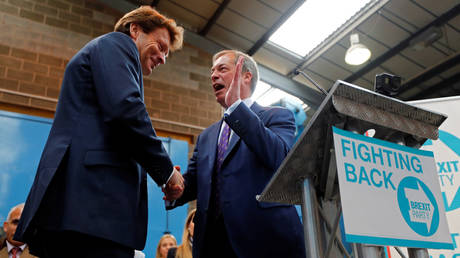 The new Brexit Party, led by Nigel Farage, is on course to cause a political earthquake at next month’s EU Parliament elections, with a new survey showing his anti-EU group ahead of both Labour and the Tories.

YouGov, one of Britain’s main polling companies, has Farage’s Brexit Party at 27 percent, five points ahead of Labour and well ahead of PM Theresa May’s Conservatives at 15 percent, with just a few weeks to go until elections on May 23.

The newly-formed party has surged 12 percent in less than a week, with Farage’s former party, UKIP, suffering the most from the pro-Brexit group’s incarnation, plunging seven percent over the same period.

Topping the EU election polls is familiar territory for Farage, having led UKIP to victory in 2014, securing 26.6 percent of the vote. His former party nosedived in the YouGov survey under the leadership of Gerard Batten.

Also on rt.com
The Brexit Party: UKIP but without the far-right, claims Nigel Farage


Farage launched his new party on Friday, claiming they would mirror UKIP on policies, but when it came to their members and candidates up for election, there would be no far-right faction, which has dogged his former party.

One of those candidates standing for election will be Annunziata Rees-Mogg, the sister of Tory Brexiteer Jacob Rees-Mogg. She has twice stood to be a Conservative MP, but has now left after 35 years to join Farage’s army of Brexiteers.