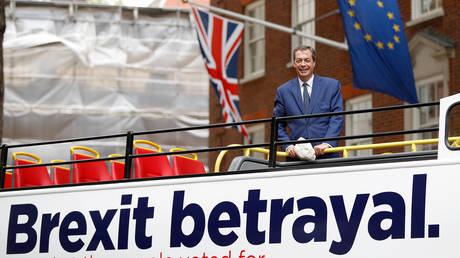 After trashing Theresa May’s Brexit deal as a “betrayal,” Nigel Farage compared the document to the Treaty of Versailles, which he and many others blame for Hitler’s rise to power in Germany.

The right-wing MEP told the audience at the European Parliament that May’s withdraw deal was a “slow-motion betrayal” and “perhaps the greatest betrayal of any democratic vote in the history of our nation.”

I’ll go back to the First World War: We won the war but we had the Treaty of Versailles. We have a reparations bill of 39 billion we have to pay, but nothing in return.

In other words, despite winning the Brexit vote, May’s watered-down deal has left ‘Leave’ voters making compromises as though they had been defeated.


In 2014, Farage called the World War I armistice “the biggest mistake of the century,” which helped to create difficult conditions in Germany that eventually led to Hitler taking power. Unlike the historical treaty, however, he remains confident that May’s deal will be defeated.

This treaty is a bad peace, it is unacceptable, it is not Brexit, and it will not pass.

Having formerly served as the leader of the Independence Party, Farage recently slotted himself to take charge of his newly formed Euroskeptic “Brexit Party,” which aims to advocate for the UK’s timely exit from the European Union in the face of continued stalling and setbacks.

Also on rt.com
‘I will take over as Brexit Party leader’: Nigel Farage back on the frontline


As Theresa May continues to desperately push her unpopular compromise Brexit bill, rumors are already beginning to circulate that the Prime Minister will announce the date of her resignation when she addresses Tory MPs on Wednesday.