On Thursday, the FCC’s net neutrality rule was published in the Federal Register. This was the official start of the next phase of the campaign to protect the open Internet as a common carrier with equal access for all and without prejudice based on content (net neutrality).

There are multiple fronts of struggle to make net neutrality a reality: Congress, the courts, states and communities. This is part of a campaign to create an Internet for the 21st Century that is fast, reliable and available in all communities.

Polls show widespread support for net neutrality. Last year, polling found 77% of people in the United States “support keeping the net neutrality rules, which are already in place” and 87% agree that “people should be able to access any websites they want on the internet, without any blocking, slowing down, or throttling by their internet service providers.” The FCC’s net neutrality rule does the opposite of the national consensus, and if members of Congress want support from Internet users, they need to reverse the FCC’s rule. 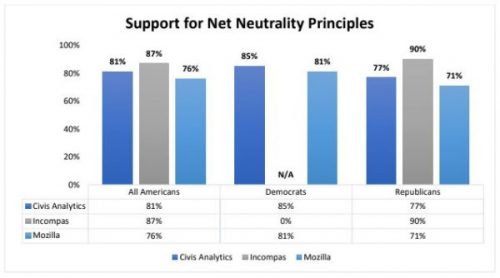 and commissioned by INCOMPAS, 1,502 registered voters

Under the Congressional Review…