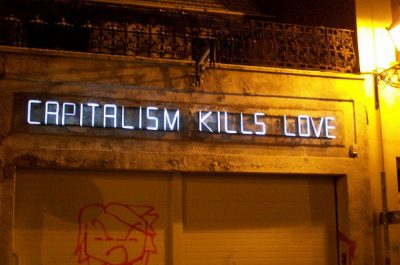 The work to transform society involves two parallel paths: resisting harmful systems and institutions and creating new systems and institutions to replace them. Our focus in this article is on positive work that people are doing to change current systems in ways that reduce the wealth divide, meet basic needs, ensure sustainability, create economic and racial justice and provide people with greater control over their lives.

When we and others organized the Occupation of Washington, DC in 2011, we subtitled the encampment ‘Stop the Machine, Create a New World’, to highlight both aspects of movement tasks — resistance and creation. One Popular Resistance project, It’s Our Economy, reports on economic democracy and new forms of ownership and economic development.

Throughout US history, resistance movements have coincided with the growth of economic democracy alternatives such as worker cooperatives, mutual aid and credit unions. John Curl writes about this parallel path in “For All the People,” which we summarized in “Cooperatives and Community Work are Part of American DNA.”

Mahatma Gandhi’s program of nonviolent resistance, satyagraha, had two components: obstructive resistance and constructive programs. Gandhi promoted Swaraj, a form of “self-rule” that would bring independence not just from the British Empire but also from the state through building community-based systems of self-sufficiency. He envisioned economic democracy at the…