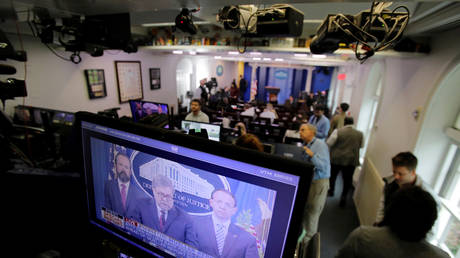 With the Mueller report exonerating US President Donald Trump of colluding with Russia, ‘Resistance’ media lost no time in shifting their angle of attack – it’s now all about ‘obstruction’ and AG William Barr.

After AG Barr went before the press and quoted bits of Mueller’s now-released report, as well as his personal conclusions, panelists on CNN went all-out blaming him for trying to portray Trump as innocent of obstruction of justice. In a packed studio, eight people spent hours bouncing back and forth on a few of the same talking points – mostly attacking Barr’s presentation of Mueller’s release.

Echoing Democratic leaders’ accusations of partisanship, CNN legal analyst Carrie Cordero said Barr “had an opportunity to rise above the politics” and only talk about the dry process of reaching conclusions, “and he blew it.”

CNN has 8 people talking about this & they all vehemently agree with one another on every last thing. This has been a major part of the problem from the start. All humans are more likely to err or worse if they are insulated from challenge or dissent. It’s inherently corrupting: pic.twitter.com/6U5aZqzgPn

They took particular issue with how Barr mentioned Trump’s anger and frustration in the face of attacks by ‘Russiagate’-peddling media (like the CNN). Laura Coates, another legal analyst, went as far as calling it an “Oprah moment”, following it up with an emphatic “you’ve got to be kidding me!”

For my money, this is the most damning example of Barr’s malicious intent. Borrowing an apt phrase from former Chief Justice William Rehnquist, Barr wretched the words from their proper context.
He is without shame. https://t.co/sFPcMjet9U

That arrogant, willfully misleading press conference was shocking even by 2019 standards. We continue to underreact to our government’s transformation into an authoritarian junta.

Reminder: George Herbert Walker Bush could have been impeached if not for William Barr acting as his attorney instead of the attorney general of the United States.

it’s hard to describe how dishonest Barr has to be to read this report and announce it exonerates Trump.

While others pointed out the mainstream media’s obsession with taking down Trump and anyone standing in the way to that.

They’re not even pretending, and don’t even have a token dissenter who gets to speak for 30 seconds once every 10 minutes. It’s the most emotional thing I’ve ever seen from TV news people.

Blown away by this take. The media, Congress, EVERYONE has been using the term “collusion” for two plus years, and this guy is criticizing Barr for using it? IS THIS EVEN REAL LIFE https://t.co/7dK9Qjk38l

It’s pretty stunning. When I turned it on, a “legal analyst” was (of course) comparing Barr to Roy Cohn

Because “collusion” is not a term recognized in the law

Then WHAT WERE YOUR NETWORKS DOING FOR THE LAST TWO YEARS BRIANpic.twitter.com/s9hZq5i7im