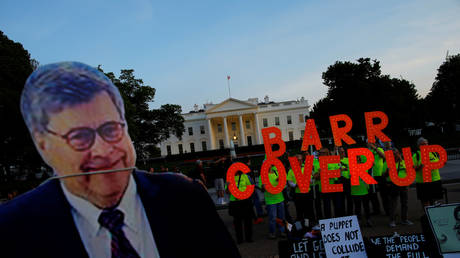 Even with the ‘Russian collusion’ narrative buried by the Mueller report, some mainstream journalists have come out to claim their anti-Trump coverage was backed up by the report. Were they reading a different report?

The Mueller report, CNN’s Shimon Prokupecz said on Thursday, “really corroborated a lot of the good journalism that was done” during the last two years.

“One of my main conclusions from the #MuellerReport so far is that the vast majority of *reporting* on Trump and Russia was extremely accurate,” GQ magazine’s Julia Ioffe chimed in.

One of my main conclusions from them #MuellerReport so far is that the vast majority of *reporting* on Trump and Russia was extremely accurate.

Prokupecz is not entirely wrong. Both CNN and Mueller’s team shared an obsession with chronicling every last inconsequential encounter between anyone connected to candidate Trump and anyone remotely connected to Russia, no matter how peripheral. From handshakes at the Republican National Convention to missed calls and unanswered emails, Mueller’s report is completely absent of bombshells, but heavy on humdrum contacts.

When it came to examining these tidbits, however, they were often completely wrong.

Both Mueller and the media focused heavily on the infamous Trump Tower meeting, during which Donald Trump Jr., Paul Manafort, and Jared Kushner met with a Russian delegation to discuss US/Russian relations, and potentially damaging information to Hillary Clinton’s campaign. The meeting was, as Kushner told Manafort, a “waste of time,” and no information was provided.

Not to CNN, who reported the “collusion bombshell” that President Trump knew about the meeting in advance, accompanying the headline with the lede: “holy crap.” Of course, the source for the article was none other than former Trump lawyer and convicted perjurer Michael Cohen, but that didn’t stop CNN from suggesting that Cohen’s word could “be the biggest step to date in proving real collusion,” and finishing with the poetic and barf-inducing: “Where have you gone Robert Mueller? Our nation turns its lonely eyes to you.”

Well, Mueller was investigating, and found “no documentary evidence” that Trump knew about the meeting or its “Russian connection.” Sorry CNN.

Mueller says he found “no documentary evidence” showing that Trump was told in advance of the Trump Tower meeting or its connection to Russia. pic.twitter.com/4tloF0NiWB

And it wasn’t just Trump tower. CNN claimed that Trump Jr. was given “advanced access” to the WikiLeaks archive of leaked Democratic Party emails in 2016. Mueller’s report proved this to be false, and even at the time CNN issued a retraction. A year later, three CNN employees resigned over a false story about an alleged investigation into “a Russian investment fund with ties to Trump officials.”

CNN was far from the only outlet to cry collusion where Mueller found none. Buzzfeed famously broke the scoop earlier this year that Trump had directly instructed Cohen to lie to Congress about shelved plans to build a Trump Tower property in Moscow. Buzzfeed’s lie was so egregious that Mueller himself spoke out and denied it, three months before the report landed.

As the media peddled conspiracy after conspiracy about Trump and Russia, Mueller’s team combed through federal statutes, looking for a way to make something stick. They ultimately failed to “establish that members of the Trump campaign conspired or coordinated with the Russian government in its election interference activities.”

CNN had circled the wagons ever since Attorney General William Barr released a summary of the report’s main findings late last month, with host Jake Tapper claiming “I don’t know anybody that got anything wrong” in the network’s two years of puffing from the collusion crack pipe.

“We never stated that there was conspiracy/collusion,” Tapper tweeted at the time. “Yes some others did.”

Obviously there are those stories that were wrong and were corrected. I was — I thought obviously — referring to the larger “collusion” narrative which is what I thought Mulvaney was referring to. We never stated there was conspiracy/collusion. Yes some others did.

CNN certainly dropped enough “collusion bombshells,” and regularly featured guests who swore up and down that collusion had taken place. Tapper himself seemed happy to send his Twitter followers to articles claiming the same, including one from the Washington Post entitled “bungled collusion is still collusion.”

Now, several weeks and a full report later, the business end of that crack pipe is still hot to the touch. After a panel discussion attacking Attorney General Barr for his “excessive” pronouncement that there was “no collusion,” CNN’s chief legal analyst Jeffrey Toobin drew his own conclusion, tweeting that Trump’s frustration with the investigation against him was somehow “evidence of guilt.”’

Happy people don’t obstruct justice. Trump’s frustration at leaks and investigation are evidence of guilt, not innocence. But let’s see the report . .