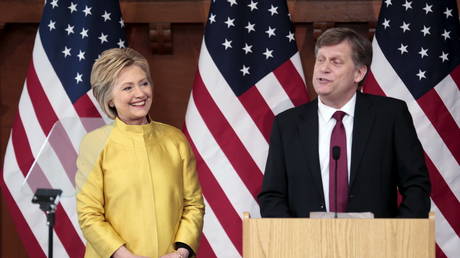 How do you stop those pesky Ruskies from meddling in the world’s greatest democracy, prevent your dodgy emails from leaking and tame unruly social media platforms? Ex-Moscow envoy Michael McFaul has offered this five-point plan.

Ambassador McFaul has frequently been called upon by media over the last two years to give his ‘expert’ analysis on all things Russia-related – and he was no less adamant about the need to combat the country’s nefarious “influence” on Americans during his Thursday testimony to the House Intelligence Committee. This is how the experienced diplomat (and now a distinguished Russiagater) wants to ward off unwanted Russian influence.

Of you want to dig deeper, here is my written testimony, footnotes and all, for today’s House Intelligence Committee hearing. https://t.co/iShW5MfaUQ

First up, cybersecurity infrastructure for elections. McFaul warned lawmakers that American elections must be totally secure and not susceptible to Vladimir Putin’s meddling. But Putin “doesn’t need to steal 78,000 votes” outright, he said – he just needs to manufacture some “media scandals” to polarize American voters as they head to the polls. In other words, any political scandals happening around the time of US elections from now on can be blamed on Russia’s GRU intelligence operatives. Handy!

Second, basic “cyber hygiene” for people working on campaigns is crucial, McFaul said. Presumably, this involves regular password changes and some solid anti-hacking software – particularly if you’ve got any sensitive emails to hide. You never know when the evil Russians might be lurking in your server.

Third, “deamplify” social media. Put another way, impressionable Americans should log out of Facebook and Twitter because they might see something that could alter their perception of reality – maybe a funny political meme or something even more untoward, like a link to an RT article, perhaps.

Also on rt.com
Trump is a gold mine for MSM, they should be the first to donate to his 2020 campaign


Twitter and Facebook could probably help out on this front by shadowbanning more accounts and censoring more problematic political content.  Why even allow conversation at all when national security is at stake?

Fourth, it’s not enough to trust the masses to do all this on their own, so “third parties” must “coordinate” this operation with the intelligence community. McFaul didn’t specify, but “third parties” could be – and most likely is – a reference to some well-known internet giants. Those should be prepared to do exactly what the FBI and CIA tell them to do – all to protect democracy, of course.

Finally, Americans must not be influenced by dangerous foreign media like RT and Sputnik during the election, as they “actively seek to shape American public opinion.” The first step is to ban Sputnik from tweeting #CrookedHillary (and no, this is not the Onion).

And if you still aren’t convinced that the Russians are coming, McFaul said that it was “right” to compare the nefarious (but so elusive) Russian “meddling” to… the 9/11 attacks.

.@McFaul equates Russia buying some facebook ads in 2016 to 9/11. Disgusting!