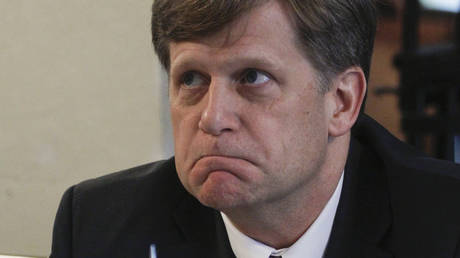 Prolific tweeter and former US ambassador to Russia Michael McFaul suffered a shock on Tuesday, finding himself blocked by a fellow liberal and New York Times reporter — for the unforgivable sin of criticizing one of his articles.

It was zero tolerance from Times reporter Kenneth P. Vogel after McFaul tweeted that the paper of record was not at “their best” in the piece and criticized the “shocking” methods used by the reporter for the article in question.

This is shocking. @nytimes , what are you doing? What on earth would a mother have to do with a story about her daughter and Sanders? Now more than ever, we need our best news organizations to be their best. This is not that. https://t.co/bab0mRLBFl

The unsuspecting McFaul went about his business only to discover hours later that a clearly insulted Vogel had pulled an insta-block on him, seemingly unable to take mild (and very politely expressed) criticism, even from a former Obama administration official who he had worked with before on previous stories.

I just realized that @kenvogel has blocked me? Because I criticized his article today? Wow. I’ve worked with dozens, maybe hundreds of reporters @nytimes over decades, including Ken. This is really odd.

Many might have simply moved on with their day, but the shell-shocked McFaul was nowhere near ready to let the issue drop. Instead, he tweeted about the unexpected burn 13 more times — and that’s not including the multiple retweets he shared from other people also criticizing Vogel’s reluctance to engage.

A “saddened and offended” McFaul tweeted about how he had read the paper “every day for over thirty years” and pondered whether, as a purchaser, he had an inalienable right to see its reporters tweets.

I find it unethical. Frankly, I’m also shocked. And as a HUGE fan and 30+ year subscriber of the @nyt, I am also saddened and offended. (Imagine me blocking a Stanford student?) https://t.co/UlcGaqaMyX

So, you see, I — as a purchaser of this newspaper — should be able to see such a tweet, since that is a continuation of the reporting/story. At least, that’s my position. But again, Im ready to change my mind if someone can provide a rationale for being blocked by @kenvogel. https://t.co/gWmljSd9H7

The issue, he said, was “bigger than one journalist,” imploring the Times’ editors to “weigh in” on Vogel’s “unethical” block-happy approach to Twitter criticism. It might even be “cutting against the grain of free speech,” he said.

Other tweeters attempted to soothe McFaul’s hurt feelings by letting him know that liberal Vogel also makes…liberal use of the block button, too. Vogel “mass blocks literally everybody” who is even “slightly critical,” one tweeter, said. Another who claimed to have “known Ken [Vogel] since Kindergarten” didn’t escape his Twitter wrath either.

Don’t think it matters that he mass blocked. I pay for a subscription to @nytimes. As long as I am respectful and don’t violate Twitter rules I should be able to question and criticize journalists tweeting from their official accounts.

Vogel, for his part, hasn’t commented on the spat — but tweets he posted a few days prior to the McFaul drama (likely following another blocking spree) offer some insight into his blocking policy.

Well, that’s that then. So much for those liberal values of free speech and civil debate.

I am continually surprised by the folks on this website who lob ad hominems, question motives & even make threats, then become outraged when they get blocked.